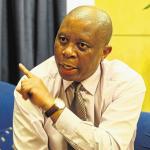 Mashaba responded by saying that Duduzane’s father was the one who stole and that he caused more poverty than the National Party did during Apartheid. Mashaba said:

South Africa was stolen under a democratic dispensation under your father’s administration. We are not victims. We know our History. Your father impoverished Black South Africans worse than the National Party imagined. Don’t insult us!

In response, one ClydeNSRamalaine @NiklosStephan likened Mashaba to Tsvangirai, the founding leader of the opposition Movement for Democratic Change (MDC). The ruling ZANU PF often accused Tsvangirai of being a puppet of Western powers. Read the response:

@HermanMashaba is nothing but the Morgan Tsvangirai of SA. He bows to whiteness with special submission and pretends to be the answer to SA societal life. He worships and is controlled by whites, who has trained him to hate Zuma.

Mashaba replied saying he would not bow to the pressure of associating with alleged corruption and criminality. He said:

It is so deeply sad when some people believe to be black is to be behind corruption and criminality. I am so glad such people are not part of my proud black race. They are criminals and that is all they represent.

He said that he aligns himself with black people.

Some view Tsvangirayi as one of the greatest patriots to ever emerge from Zimbabwe.

The Observer 6 months ago