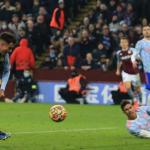 Manchester United were leading by two goals to nil when Coutinho was introduced.

Coutinho was just about to be introduced by Villa boss Gerrard midway through the second half when Bruno Fernandes slammed home his second goal of the game off the underside of the bar.

When the former Liverpool player was eventually introduced, he drove at the United defence, helping to create the space which Jacob Ramsey exploited to halve the deficit.

Then Ramsey slid over an excellent cross from the left which Raphael Varane was unable to intercept as he slid back, leaving Coutinho to finish into an empty net.

The goal brought celebrations at both ends of the pitch as Villa’s goal minder, Emiliano Martinez, also went into the crowd in relief – it was the Argentine’s horrible sixth-minute error that had gifted Fernandes the visitors’ opener.

Coutinho who is still a Barcelona player is set to spend the rest of this season on loan at Villa Park.

He is reuniting with his former teammate, Steven Gerrard, who is the Villa coach now after taking over from Dean Smith.

US$0 Harare
Boe 4 months ago

Coach we Man U Ranganai anodzingwa before season ends kkkk