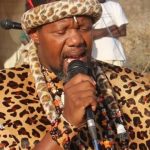 Mnangagwa reportedly took with him more than 100 people and hired a private jet from the former Soviet Republic of Azerbaijan, at a reported cost of US$1 million.

Ndiweni suggested that the plane that took Mnangagwa to Scotland could have been carrying smuggled precious stones. He said:

Mnangagwa’s extravagance shows the falsehoods of the sanctions campaign. Over a hundred world leaders arrived in Glasgow for the climate change conference.

Among the leaders present was Mnangagwa, whose delegation was double that of South Africa, a nation that is one of the G20 nations.

… Zimbabwean government’s position has always been that the targeted sanctions crippled the economy and finances of the government completely.

Surprisingly, the world witnessed a huge delegation from Zimbabwe in Glasgow for the COP26 and huge spending allowances for each delegate in United States dollars throughout the conference.

The former Ntabazinduna chief took part in protests against Mnangagwa in the UK during the COP26 summit.