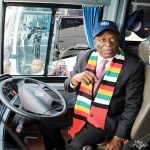 Political analyst Rashweat Mukundu said Mnangagwa’s use of ZUPCO buses to bring crowds to his rallies is a clear sign of his fears of the ongoing internal power struggles within Zanu PF. He added:

Bringing crowds to himself is a push back on calls within the party and outside for him to leave office for allegedly failing to deliver on his promises.

So this is a show of force and support, but unfortunately this is abuse of state resources,” .

This is a replication of history from what we were witnessing with Mugabe in the past when every time he felt under threat he would seek to demonstrate that he was still wanted by bussing people to such impromptu rallies.

We are back to the same scenario under which there is this growing fear in Zanu PF that Chamisa is demonstrating his support base, and so they are being forced in a way to respond by attempting to show that Mnangagwa has power.

Previously, ZANU PF organised “million-men” marches on the streets of Harare in support of Mugabe’s candidature to contest the following year’s 2008 elections.

Thousands of ZANU PF supporters were ferried into Harare from all over the country by busses and trains.

The Zimbabwe Coalition on Debt and Development (ZIMCODD), a debt management and public finance accountability research institute, said there was evidence to suggest that parastatals were failing because of misuse and being used for partisan or political rallies and whatever. ZIMCODD’s Florence Ndlovu said:

For me, as a taxpayer, I would want to know if they (ZANU PF) are paying for these services because this is taxpayers’ money.

Zupco is a state enterprise and if you look into the AG’s (auditor-general Mildred Chiri) reports, most of them are in arrears on everything.

This is because the resources are used for political party politics.

Mukundu said probing whether Zanu PF was paying for the Zupco services in the spirit of accountability and transparency was difficult because of the naked conflation between the transport company and the ruling party.