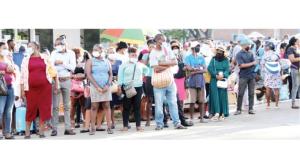 Transport challenges have re-emerged in Bulawayo, Zimbabwe’s second-largest city after the Zimbabwe Republic Police (ZRP) launched an operation on Saturday targeting drivers of unregistered vehicles and those without number plates.

The Police said some of the unregistered and plate-less vehicles were being used by criminals in the commission of rapes, armed robberies, among other crimes.

Residents who have been boarding private vehicles due to the acute shortage of Zimbabwe United Passengers Company (ZUPCO) buses said since the ZRP operation commenced, the transport crisis has worsened.

A student at Zimbabwe College, Sithandiwe Ndebele (22), told Chronicle that the transport crisis is affecting students as they are failing to make it to school on time.

Government policy states that only ZUPCO vehicles are allowed to transport people.

But these buses and kombis are not enough, they are failing to fully take care of the transport system.

The solution to these challenges can be allowing other legal transport organisations such as Tshova Mubayiwa, BUPTA, and City Transit to operate again as they used to.

This can help reduce pressure on ZUPCO, considering the fact that some of its buses are not in good condition.

There are those vehicles you board telling yourself that I’m kind of signing a death sentence.

ZUPCO Division Operations Manager Tineyi Rwasoka said he was not aware of reports claiming that people were failing to get transport at night. He said:

ZUPCO vehicles knock off when we are sure that there are no commuters waiting to be ferried to their homes, but we do take note of the curfew time.

We are not aware that commuters are facing the challenge, we will look into the issue as soon as we can.

As we acquire new buses, we distribute to each province an equitable number of buses to enable continuous travel by our passengers.

In addition to the continuous enrolment of our private players into our franchise system to augment our fleet complement, we have also introduced rail services in the major cities during peak hours to provide passenger transportation.

In the urban areas, we also augment our available fleet by utilising buses that ply the intercity routes during the day, which assist with peak hour movement of our passengers.

We encourage all to use designated pickup points for the purpose of boarding our buses.

I WANT TO REPEAT WHAT I SAID EARLIER ON ABOUT THIS OPERATION ON UNREGISTERED, UNLICENSED AND PLATELESS VEHICLES. THIS IS A NOBLE OPERATION BECAUSE CRIMINALS ALSO USE THESE VEHICLES TO COMMIT CRIMES.

POLICE SPOKESMAN, ASSISTANT COMMISSIONER PAUL NYATHI IS ALSO UPDATING MEMBERS OF THE PUBLIC FROM TIME TO TIME. HE IS UPDATING THE PUBLIC ON NUMBERS WHICH POLICE HAVE ARRESTED ONLY LEAVING OUT HOW MANY CRIMINALS HAVE BEEN ARRESTED.

IF YOU GIVE THE PUBLIC THAT INFORMATION IT WILL PACIFY THEM BECAUSE POLICE OPERATION IS BEING SUCCESSFUL. REMEMBER THAT THIS OPERATION IS INCONVENIENCING A LOT OF PEOPLE.

I APPEAL TO CVR TOO TO SPEED UP THE ISSUING OF NUMBER PLATES AND RELATED DOCUMENTS. SOME COMMUTERS ARE GETTING HOME LATE, AT AROUND 2200 HOURS.