Come Back Home, Mnangagwa Is As Soft As Wool - Bishop Manhanga 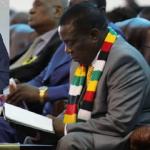 Bishop Trevor Manhanga this Sunday urged all Zimbabweans scattered all over the country including exiled politicians, to come back home to have a hand in the rebuilding of the Southern African country.

The Pentecostal Assemblies of Zimbabwe leader said they should not fear that president Emmerson Mnangagwa would be vengeful for whatever they did in the past adding that “our president is as soft as wool,” a statement Mnangagwa made during his early days in office.

Hundreds of thousands of Zimbabweans live in the diaspora after fleeing from political persecution and or the deteriorating economy.

Bishop Manhanga was speaking at the 2021/2022 National Thanksgiving and Dedication Service held under the theme ‘Pursuing Nation Building Initiatives in the Spirit of Godly Patriotism, Unity, Ownership and Inclusiveness.’

He also denounced both Sanctions imposed on the country by Western powers at the turn of the millennium and corruption saying the ills were “twins born of the same father” and were doing nothing but destruction to the country.

President Mnangagwa attended the event that was being moderated by Bishop Andrew Wutawunashe.

Bishop Wutawunashe said a united people can achieve anything. He cited Genesis 11 in the Bible which reads in part:

6 And the Lord said, Behold, the people is one, and they have all one language; and this they begin to do: and now nothing will be restrained from them, which they have imagined to do.

All speakers at the event urged the nation to be patriotic, have a sense of pride for their nation and make sacrifices towards nation-building.

BISHOP MANHANGA HAS GREAT IDEAS. WHY DOES THE NOT START THE PROCESS NOW RATHER THAN LATER.

BISHOP MANHANGA HAS PROPERLY SAID IT THAT OUR GOVERNMENT HAS SOCIAL, POLITICAL AND CRIMINAL FOES WHO THE GOVERNMENT MUST WOE AND CONVINCE TO COME BACK HOME.

PRESIDENT ED MNANGAGWA IS NOT JUST AN EXPERIENCED POLITICIAN. HE IS ALSO A SEASONED LAWYER. HE KNOWS THAT THOSE REFUGEE POLITICIANS AND CRIMINALS WILL NOT COME BACK BEFORE HE SHOWS HIS SOFTNESS AS A WOOL BY PROMULGATING LAWS WHICH INVITE THEM BACK HOME.

A WORD OF MOUTH DOES NOT CONVINCE MUZEMBI, ZHUWAWO, KAKUKUWERE, MASHAYAMOMBE AND JONATHAN MOYO TO COME BACK HOME. GOVERNMENT MUST PROMULGATE LAWS WHICH LURE THESE GUYS TO COME BACK HOME AND HELP TO BUILD ZIMBABWE.

YES, SURE. ITS TRUE.
MR. PFEE IS A GOOD MASTER.
COME BACK TO VOTE.
AS LONG AS YOU COME BACK.

TELL HIM THAT YOU ARE BACK, HE WON'T KILL, ARREST OR TORTURE YOU.

HE IS AS SOFT AS WOOL.

SOME OUTSIDERS WHO ASKED FOR FORGIVENESS WERE FORGIVEN.

DO NOT MAKE MISTAKES AGAIN TO BE FORGIVEN BECAUSE THE PRESENT HAS BLOOD IN HIS VEINS.

HE CAN ALSO LOOSE RESPECT IF YOU DON'T RESPECT HIS RESPECT.

YOU ARE ALL FORGIVEN, COME BACK BUT YOU MUST RESPECT HIS MISTAKE TO FORGIVE YOU

We don't listen to bishops. They are of no value. They are useless and they don't think. They are political puppets. Bloody idiots only believe them

US$3.65 Harare
IMF Secretary 6 months ago

Why should he be called a liar?.