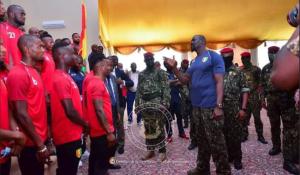 Guinea’s interim president, Colonel Mamady Doumbouya, has reportedly forgiven the National Elephants for their Round of 16 exit from the ongoing 2021 Africa Cup of Nations (AFCON) finals.

The National Elephants of Guinea were told before the start of the tournament by Colonel Mamady Doumbouya to win the tournament or return the country’s investment.

They excelled in the group stages only to lose 2-1 to debutants Gambia thereby failing to progress to the quarter-final stage.

According to Ghanaian award-winning sports journalist, Saddick Adams, Colonel Mamady Doumbouya has forgiven the team for their inability to win the tournament as he stated that the pre-AFCON message was just to motivate the team to perform better.

However, he wants a refund of part of the money as the budget was to take them to the semi-finals of the competition and not the Round of 16. Saddick Adams said:

Guinea President Mamady Doumbouya has forgiven the team. Says his ultimatum was just to encourage them. He understands team building takes time. BUT, the money given to the team covered QF, Semi-final and final games and that must be returned to the state coffers.

Some suggest that the same should have been done for the Zimbabwe Warriors who have in their five attempts so far failed to go yonder the group stages.

Kklk we are far much better