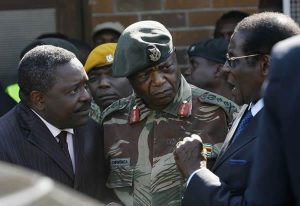 A top civil society activist has said Gukurahundi was never a result of tribal differences but was a strategy by then Prime Minister Robert Mugabe to consolidate power.

Gukurahundi, is a term used to refer to disturbances in Matabeleland and Midlands in the 1980s which resulted in the death of an estimated 20 000 people when the state sent the North Korean-trained Fifth Brigade to “deal with dissidents.”

Ibhetshu LikaZulu secretary-general Mbuso Fuzwayo says the current Ndebele versus Shona narrative was beneficial to the perpetrators, the state, which employed those that killed people on its orders. Fuzwayo said:

The difference between the Gukurahundi genocide and what happened in Rwanda is that Rwandans killed each other, it was not their state, but here there were people who were paid, on government payroll, civil servants who were taking instructions from the executive. That is why you see the minister of State, Minister of Defence (Emmerson Dambudzo Mnangagwa) and Head of State, who happened to be Robert Mugabe then, issuing statements that were inciting. It is not a Shona versus Ndebele, it is the government of Zimbabwe versus the people it was supposed to protect.

Besides Mugabe who described the massacre as a moment of madness, other Zanu PF leaders implicated in the genocide include Vice President Constantino Chiwenga who headed 1 Brigade in Bulawayo, and the late Perrance Shiri, known during that time as Black Jesus.

I always Shonas that whenever e Ndebeles talk about Gukurahundi,e Shonas must not to defend Mugabe, because most Shonas believe that Gukurahundi is Ndebele vs Shona war..no it's not.The gvt shld be help accountable atrocities.. early 2000 violence...2008 violence n so forth...

You're an idiot. Which Shonas believe that it was Shona against Ndebele? We all know what happened. There were rebels or infact terrorists called Dissidents who were busy ruining lives for the Shona. The soldiers were later sent because of the insurgents. They did what had to be done. I don't see any problem here. There are also terrorists in Mozambique who are being dealt with as we speak. I don't doubt that in the future they will claim to be victims even though they are busy attacking unarmed civilians