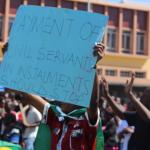 Civil servants are pushing the Government to pay their salaries in foreign currency with renewed confidence after they received forex bonuses in November.

The Apex Council and Government representatives held a National Joint Negotiating Committee (NJNC) meeting on Tuesday to deliberate on the welfare of Government workers.

We had a meeting with the Government team and we stated that we want our salaries to be paid in foreign currency.

We are waiting for Government response. The Government negotiating team indicated that it will come back to us early next month.

Our position is that our salaries should be pegged based on the October 2018 value when a teacher was being paid US$528 and US$440 for the least paid in Government.

She said the payment of bonuses in forex was proof that the Government now has the capacity to pay salaries in forex.

Public Service, Labour and Social Welfare Minister Paul Mavima said he was yet to get a report from the Government’s team.

I know your plight but we can't dollarise, our main aim is to stabilise the zwl currency in relation to the USD.

Dollarisation has extremely bigger repercussions to the generality of the economy as a whole.

Government net Apex council met today had Breakfast Lunch,Tea,Supper Diner signed for the T& S and left for gala organised by Finance Ministry and agreed to meet in Feb April June August November December 2022 to deliberate on the salary demands in forex.

This government is selfish and inconsiderate nxaaa!

OR ELSE GOVERNMENT MUST PAY ITS LABOUR FORCE IN RTGS, BUT CONVERTED FROM US$ LEVEL OF 2018. THESE WERE THE TWO OPTIONS WHICH WERE GIVEN BY APEX COUNCIL TO GOVERNMENT.

GOVERNMENT MUST ACKNOWLEDGE THAT ONCE YOU ADOPT US$ AS YOUR CURRENCY, IT IS VERY DIFFICULT TO REMOVE IT.

IT IS WELL KNOWN THAT US$ AS A CURRENCY WAS INTRODUCED BY THE FIRST ADMINISTRATION, THAT ADMINISTRATION IS NO LONGER THERE. IT IS SECOND ADMINISTRATION WHICH IS THE DRIVING SEAT. IT MUST SORT OUT THIS MESS AND AWARD ITS EMPLOYEES AFFORDABLE SALARIES.

[PECUNIA PROPOPULO (MONEY FOR THE PEOPLE)]

Chokwadi mungati single payment in USD for bonus mototi it's the evidence that the Government now has the capacity to pay salaries in forex? Are you serious nezvamuri kutaura

US$4.00 Harare
The Observer 4 months ago

ngavangotipe Mari yedu even iri RTGS but iri equivalent 2 the October 2018 salaries. We had suffered enough