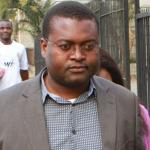 Alex Tawanda Magaisa, a Law lecturer at Kent University in the United Kingdom has dissuaded the opposition from considering boycotting the 26 March by-elections saying the citizenry has a message to deliver.

The by-elections are meant to fill 133 vacant local government and parliamentary seats most of which were left vacant when opposition MDC-T led by Douglas Mwonzora recalled members of rival MDC Alliance accusing them of ceasing to be members of the MDC-T.

Some members of the MDC Alliance are suggesting that the party could boycott the by-elections if the requisite electoral reforms have not been implemented.

The implementation of electoral reforms has been a topical issue across the political divide with the MDC-T having approached President Emmerson Mnangagwa to propose that the elections be postponed to allow for reforms to take place first.

Meanwhile, Magaisa who is a former Chief of Staff in the office of a former Prime Minister of Zimbabwe, the late Morgan Tsvangirai, believes elections must proceed. He said:

Any thought of boycotting by-elections would be a gross misreading of the political mood in the country. These particular by-elections mean a great deal to citizens whose representatives were unjustly removed by individuals wearing stolen robes. They have a statement to deliver.

Some political analysts say the by-elections will work as a gauge for the country’s preparedness to hold the 2023 harmonised elections.

Some, however, say it will be unfair for those who would have been elected in March to serve up to 2023 instead of a five-year term.

I SUPPORT LAW LECTURER MR TAWANDA MAGAISA, WHO SAYS BYELECTIONS MUST PROCEED WHETHER REFORMS HAVE BEEN IMPLEMENTED OR NOT

MDC ALLIANCE SHOULD NOT WASTE TIME BY WITHDRAWING FROM THE BYELECTIONS. IT WILL MEAN NOTHING TO THE WORLD. AN ELECTION WHERE 2 PEOPLE PARTICIPATE INSTEAD OF 40 IS STILL TAKEN AS AN ELECTION ALTHOUGH IT LOSES CREDIBILITY.

MDC ALLIANCE SHOULD NOT FORGET THAT THEY SHOULD TEST THEIR STRENGTH AFTER THE RECALLS BY THE DIABROSE NYOKA.

Even though the playing field isn't level, pple are ready to vote for change. It's unfortunate that those who turned 18 in the past 2yrs couldn't register due to Zec's incompetence, registration centres were few and far between

Even if they had registered to vote...... If u were not eligible to vote in the general elections then you can't vote in the by elections. They have to wait for 2023