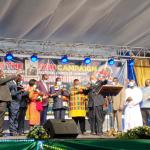 President Emmerson Mnangagwa has appealed to the church to play an active role in ensuring that by-elections scheduled for the first quarter of 2022 are held in a peaceful environment.

President Mnangagwa made the call on Sunday at the 5th edition of the annual National Thanksgiving and Dedication Service held at the Zimbabwe International Trade Fair grounds in Bulawayo. He said:

I want to highlight that in 2022, the country will be holding various electoral processes. I appeal to the church and citizens, in general, to play an active role in ensuring that peace and stability prevail in our country.

Under the Second Republic, all of us have a role to play. As we go into 2022, I call upon the Church to redouble its development initiatives and focus on projects that will complement my Government’s efforts to lift many of our people from poverty to prosperity. Faith without works is dead.

The by-elections were suspended at the onset of the COVID-19 pandemic last year, with 133 seats up for grabs in the National Assembly and councils.

Some of the seats fell vacant after the MDC-T recalled elected MDC Alliance representatives following a Supreme Court ruling in March 2020.

The Supreme Court upheld a High Court ruling that stated MDC Alliance leader Nelson Chamisa had improperly assumed the party leadership after the death of Morgan Tsvangirai in February 2018.

Using the ruling, Chamisa’s opponents regrouped and started to purge officials who rejected to submit to their newfound authority.

Nothing can be done by them. Only conflicts can be caused as they seem to be at a favor of each side.

What can they say. They are also afraid to be killed or banned

Peace begins with you 👆