Christian Eriksen Returns To England After Signing For Brentford 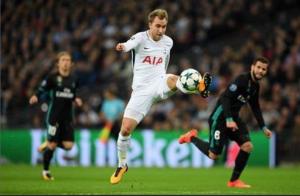 Christian Eriksen has signed for English Premier League club Brentford as the 29-year-old Dane bids to resume his playing career after suffering a cardiac arrest at Euro 2020 in June.

The former Tottenham Hotspur midfielder joins Brentford until the end of the current season having not played since he collapsed during Denmark’s game against Finland in Copenhagen last year.

The 29-year-old received life-saving treatment on the pitch and was subsequently fitted with an Implantable Cardioverter Defibrillator (ICD) device — a type of pacemaker intended to prevent fatal cardiac arrests by discharging a jolt to restore regular heart rhythm.

Serie A club Inter Milan — whom Eriksen had been contracted to at the time of the incident — announced in December that he would be allowed to move abroad in order to continue his football career, with the midfielder unable to play in Italy unless the ICD device was removed.

At the end of the year, he was training with former club Odense Boldklub in Denmark, with Eriksen asserting in January that his heart was “not an obstacle” to his ambitions of a return to football and to feature at the 2022 World Cup in Qatar.

He will now have the chance to work towards that dream under his former Denmark Under-17 coach and current Brentford manager Thomas Frank. The coach said:

I am looking forward to working with Christian again. We have taken an unbelievable opportunity to bring a World Class player to Brentford. He hasn’t trained with a team for seven months but has done a lot of work on his own.

He is fit but we will need to get him match fit and I am looking forward to seeing him work with the players and staff to get back towards his highest level.

He joins a Brentford side impressing in its maiden Premier League season, the west London team in 14th place and eight points above the relegation zone.

Tottenham tweeted: “It’s good to see you back in the Premier League, @ChrisEriksen8.”