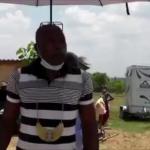 Chief Murinye was filmed earlier this week publicly castigating President Emmerson Mnangagwa for failing to take action against corrupt government officials around him.

In the video, Chief Murinye warned that Mnangagwa risked losing the 2023 presidential elections or being overthrown in another military-assisted transition.

The traditional leader made the remarks at the burial of top civil servant Elson Gonye, the head of the Pay and Benefits Development and Management Agency in Masvingo Province.

Speaking during a meeting between Mnangagwa and chiefs from across the country in Harare on Friday, Chiwenga said Chief Murinye’s conduct is unacceptable and should be investigated. He said:

So, what has been done by Chief Murinye is going to be investigated by the Minister of Local Government and the chiefs’ council and if found guilty, disciplinary action would be taken.

This is Zimbabwe. I thought I should say this, I respect Munhumutapa (President Mnangagwa) and no one touches him as long as I live.

Charumbira assured Mnangagwa that Murinye’s sentiments were his personal views and did not reflect the position of the chiefs. Said Charumbira:

We are with you as the National Council of Chiefs. Chief Murinye’s utterances should be regarded as his individual view and not that of the national council of chiefs.

Meanwhile, legal expert Tawanda Mapuranga said threats against chiefs is a deliberate plan by the government to deter the traditional leaders from speaking out against corruption or criticising rogue behaviour by Chinese mining companies. Said Mapuranga:

There is nowhere in the Constitution where chiefs are prohibited from criticising the President.

Government must learn to respect criticism from whomever to promote transparency and accountability.

Government should actually stop chiefs from supporting political parties to uphold the dictates of the Constitution.

The Masvingo chief who spoke against corruption did nothing wrong. Government should actually take heed of the advice.

Corruption must be condemned in it's strongest terms it's the cancer that's destroying our beautiful country. Hats off to Chief Murinye for reminding the President that criminals sorrounding must be termed before it's too late

Murinye maybe right ,BT the way he did is very wrong. Especially from a chief. Must follow procedure.he said ED is his nephew, sei asina kunomupa word of advise kumba kwete kuda kuonererwa nenyika yese. Now ava pama1 ega. I once said ,the will never be any new war veteran. Ska musazvifurire muchifunga kuti murikurwira nyika. Unofira mahara,and your family gets nothing

Wat u're saying is self contradictory...."Murinye maybe right ,BT the way he did is very wrong"...also zvekuti "there will never be any new war veteran" is just plain bullsh#t

US$4.00 Harare
Gundwane Ndiweni 5 months ago

Chiwenga is a druggie, he uses cocaine as told by his estranged wife Mary.

CHIEF MURINYE SHOULD ACTUALLY BE SHAKEN HIS HANDS FOR SHOWING THE WHOLE WORLD THAT ZIMBABWE IS DEMOCRATIC. PEOPLE SHOULD NOT SPOIL CHIEF MURINYE'S DEMOCRATIC SHOW PIECE.

CHIEF MURINYE HAS GONE INTO ZIMBABWE HISTORY BOOKS AS THE CHIEF WHO GAVE HIS REVERED AND ESTEEMED PRESIDENT FACTUAL AND OBJECTIVE ADVICE. CHIEF MURINYE JUST GAVE THE PRESIDENT FIRST CLASS ADVICE THAT IF HE WANTED TO WIN 2023 HARMONISED HE SHOULD GET RID OF DEADWOOD SURROUNDING HIM.

IN OTHER WORDS, CHIEF MURINYE TOOK US BACK TO THE FIRST ADMINISTRATION OF THE LATE FORMER PRESIDENT ROBERT GABRIEL MUGABE [MAY HIS SOUL REST IN ETERNAL PEACE], WHO FELL BY THE ROADSIDE BECAUSE HE HAD SURROUNDED HIMSELF WITH "YESMEN" WHO WERE FRONTED BY HIS WIFE,"DOCTOR STOP IT".

I DO NOT SEE THE REASONS TO WARN, REPREMAND OR INVESTIGATE CHIEF MURINYE BECAUSE HE ACTUALLY PROMOTED OUR DEMOCRACY IN ZIMBABWE.

BY REPREMANDING, WARNING AND INVESTIGATING CHIEF MURINYE WE ARE ACTUALLY SUFFOCATING DEMOCRACY IN OUR BELOVED COUNTRY, ZIMBABWE.

I WILL NOT HAVE DONE JUSTICE IF I DO NOT MENTION, IN PASSING THOUGH, COMMENTS BY THE PRESIDENT OF THE NATIONAL CHIEFS COUNCIL, CHIEF FORTUNE CHARUMBIRA WHO CHOSE TO MATURELY AND DEMOCRATICALLY DISASSOCIATE CHIEFS FROM UTTERANCES BY CHIEF MURINYE. HE SAID CHIEF MURINYE WAS SPEAKING HIS MIND. WHAT A MASTERPIECE CHIEF !!!!!

With u chief to the grave I personally support u 💯 lET THE CHIEF LEAVE 💯 Zimbabwe let's backup what is good this time evil thrives when good man stand and do nothing.