Chiwenga To Challenge Mnangagwa In 2022 - REPORT 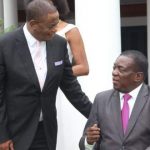 This is despite Chiwenga’s move last week to publicly state that Mnangagwa will be the uncontested ZANU PF candidate in the 2023 elections.

Meanwhile, Chiwenga’s top business executive ally Caleb Dengu, who has said Mnangagwa is illegitimate and must not run in 2023, last week slipped out of the country for the Netherlands, The NewsHawks reported.

Dengu was reportedly under fire from the President’s supporters who were threatening him with a fierce backlash and financial ruin.

The defeated yet still alive ZANU PF faction, the G-40, is reportedly supporting the move by Chiwenga to challenge Mnangagwa.

Chiwenga and G40 strategists are realigning forces within ZANU PF to challenge Mnangagwa head-on next year.

The NewsHawks reported sources within ZANU PF as saying that after Mnangagwa reneged on the deal with Chiwenga prior to the November 2017 military coup to serve only one term and allow his deputy to come in 2023, gloves are now off within the ruling party over unresolved leadership issues. Said the source:

The fallout within the party leadership is serious. We are heading for a battle royale between Mnangagwa and Chiwenga next year.

That is how politics within ZANU PF and state institutions is currently shaping up. The unresolved leadership question can no longer be managed and swept under the carpet; it has got to be settled politically, and that means through congress next year.

There is no question of another military coup; well, perhaps a palace coup might happen, but not a putsch.

When Mnangagwa took over, there was a clear understanding that he will not seek re-election in 2023.

However, Chiwenga and others were shocked to see him telling the world in an interview in September 2018 during the 73rd session of the UN General Assembly in New York that he would seek re-election in 2023. That was never agreed.

During the December 2018 ZANU PF conference at Mzingwane High School in Esigodini, Mnangagwa and his allies moved a gear up and launched a campaign for him to serve two terms, a development that reportedly did not please Chiwenga. Said another source:

At that time, it became clear Mnangagwa had broken ranks and reneged on the deal.

That worsened internal strife and infighting fuelled by the White City grenade attack in June 2018 which most ZANU PF leaders know was an inside job.

The 1 August 2018 killings in Harare in broad daylight and January 2019 stay away and the bloodbath that left many dead exacerbated the situation.

The Mnangagwa group is mainly Midlands and Masvingo province-based, while the Chiwenga one has threads cutting across different regions, although its main base has roots in the three Mashonaland provinces — Mashonaland East, Mashonaland West and Harare.

#Me pfee and see magic

US$0 Harare
Ngozi 6 months ago

Ladies and Gentleman i have this Qstion.Who is better between Mnangagwa and Chiwenga?
As for me i think Genarari is a hot tempered gentleman who's quickly to act and reason later ,a tough guy.
Mnangagwa is a bit of a matured politician who knows whats right and wrong,but because is of the past errors i think he has few friends and many enemies.

Good morning to you all my supporters

Watch the space to the Elective Congress.

This is fake news. Vakuru vari kuwirirana. This is to shift your focus

Ed has ruled himself out of favor within zanu pf. He is worse than Mugabe. Nobody wants him to stay

Game of Thrones. Just sit back and enjoy