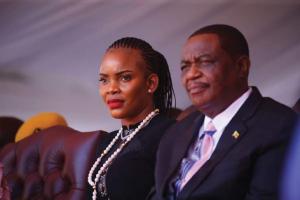 The High Court on Thursday ruled that the marriage between Vice President Constantino Chiwenga and Mary Mubaiwa ceased to exist in 2019 when the former army general gave her a US$100 divorce token.

Justice Owen Tagu, however, said issues pertaining to the custody care and control and access to the children, maintenance for spouse and child, division of matrimonial home and division of other matrimonial assets have to still be settled in civil suits which can only be heard when Mubaiwa is able to pursue the matters.

The judge ruled that the marriage between Chiwenga and Mubaiwa was the unregistered customary law union, which was terminated on 24 November 2019 after Mubaiwa was given “gupuro”, divorce token in the Shona culture.

The ruling came after Chiwenga, through his lawyer Advocate Lewis Uriri instructed by Wilson Manase of Manase and Manase, filed an urgent chamber application for an order terminating the customary union between him and Mubaiwa.

Justice Owen Tagu granted the order but said he confined himself only to the declaration sought in the chamber application.

Chiwenga, through his lawyers, argued he gave Mubaiwa a divorce token, thereby terminating the union between them in terms of the African law and custom.

Mubaiwa, through her lawyer Beatrice Mtetwa, said the gupuro was given to her in United States currency which she refused to accept as that currency could no longer be lawfully transacted in Zimbabwe.

Mubaiwa, however, could not say that the customary union had not ended. She accepted that it had terminated, but blamed Chiwenga for its demise.

Justice Tagu ruled that he saw nothing that could prevent him from granting the order sought, that is, to grant a declaratory order that the customary union between Chiwenga and Mubaiwa ended on 24 November 2019.

FOR THOSE OF US WHO DID NOT BELIEVE IN OUR AFRICAN CULTURES SHOULD GET IT FROM THIS HIGH COURT RULING WHICH ACKNOWLEDGED THAT THE CHIWENGWA'S MARRIAGE ENDED IN 2019 BASING ITS JUDGEMENT ON "GUPURO" WHICH WAS GIVEN TO MARRY BY RETIRED GENERAL CHIWENGA.

ONE DOWN, RETIRED GENERAL CHIWENGA HAS WON. THERE ARE SEVERAL ISSUES STILL OUTSTANDING SUCH AS ACCESS AND CONTROL OF CHILDREN, SHARING OF PROPERTY AND MAINTENANCE OF SPOUSE.

Reply Report Abuse
Do that 3 months ago