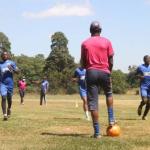 Former Warriors assistant coach Lloyd Chitembwe, who is Harare City Football Club head coach, has showered his Dynamos counterpart Tonderai Ndiraya with praises for making DeMbare a force to be reckoned with on the local football landscape.

Under Ndiraya, the Glamour Boys are unbeaten in their Chibuku Super Cup campaign, winning six matches and drawing three.

Chitembwe and Ndiraya are close friends, having worked together in the previous Warriors set-up, where they were assistants to Zdravko Logarušić.

The former Caps United midfielder said Ndiraya was building a monster of a team at Dynamos and his achievements so far are not by chance. He said:

I said it some seven or so months ago and some people didn’t take me seriously. They thought it was just a compliment to someone whom I’m close to.

Tonde is building a monster of a team and everything that he has achieved so far is not a fluke. He has brought stability to this team.

I believe he is the right kind of person for the job. I’m happy for him and the sky’s the limit for him.

Harare City and Dynamos clash in a Group 1 Chibuku Super Cup at Baobab Stadium this Sunday, with the former in need of a positive result to qualify for the quarterfinals. Dynamos are already qualified.

Meanwhile, ZPC Kariba, who are fighting for the final quarterfinal slot with City, face Caps United, who are already out, at the National Sports Stadium tomorrow.

The two matches kick off simultaneously at 11 am.

With 13 points, two clear of ZPC Kariba, it is in Harare City’s hands as they just have to equal or better the result in Harare to go through to the last eight, where Cranborne Bullets lie in wait.