Chitembwe "Honoured" To Be Back At Caps United 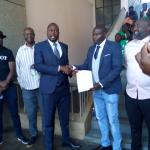 Caps United legend Lloyd Chitembwe says he is ready for the “new challenge” after being appointed the club’s coach for the second time on a three-year deal.

Chitembwe, who was officially presented to Caps United stakeholders on Monday, is making a return to the club from Harare City. He said:

I think it’s an honour and an opportunity for me to be back. I am looking forward to the challenge.

I will certainly bring with me the motivation and energy I had as a player and the same motivation as a coach.

I also believe the players will also share the same spirit the discipline.

To me, football is my livelihood and I hope the players also see football the way I do.

Caps United is an opportunity and I want to use Caps as a vehicle to fulfil our dreams and aspirations. I am very happy and excited to be back.

Club president Farai Jere described Chitembwe as one of the greatest coaches and says it’s an honour to have him at the club. Said, Jere:

It is a special day for the Caps United family because Chitembwe has actually proved to be one of the greatest coaches we have around.

His track record is there for all of us to see from the time he was a player of Caps United, he is a guy who is ambitious.

Dodo’s sacking came after the club was eliminated from the Chibuku Super Cup at the group stage, with only 2 wins in 10 matches.

Lack of ammunation sometimes makes hard for the coaches to perfom well.....maladministration affecting Zim footall from Warriors to clubs.

Jere fix administration first don't blame coaches u gonna change coaches kusvika wen . Dodo did nothing but the blame was on him not your incompetent admin ,hande toone don't think we will get results coz we have a new coach