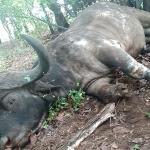 A wounded buffalo has been put down by a professional hunter after it gored a game scout and a fish poacher to death at Mteri Dam Wildlife in Chiredzi on Saturday.

Chris Davies tracked and killed the buffalo with a single shot on Tuesday around 3 PM.

Tongaat Hulett Corporate Affairs and Communications manager Isheanesu Chinhuru confirmed the development in an interview with The Mirror. He said:

The wounded Buffalo which killed a game scout and a poacher on Saturday was tracked down by Davies who is a Chiredzi based professional hunter together with his team.

He said Davies and his team began tracking the buffalo on Tuesday morning after it had gored Mashava Ian Thuli (33) a fish poacher on his left leg around 5 AM.

Thuli encountered the animal as he ran away from four game scouts who were tracking the wounded beast near Mteri Dam.

He screamed after the attack and was rushed to Chiredzi District Hospital where he died upon admission.

Around 1 PM, the scouts came across the buffalo and Patson Tekedesa fired at it and missed.

The buffalo charged at Stephen Njanji (62) who was trying to climb up a tree after sensing that possible injury or death was imminent.

The buffalo attacked Njani and gored him on the stomach and he died on the spot.

Payson Tekedesa should be arrested and charged for negligence on duty plus culpable homicide. How can a trained and qualified game ranger miss such a big target like a buffalo?

Then these trackers might be gun handlers or not.

And he is a game scout by now and a tracker too.

You cannot see the difference between a game scout and a tracker but they seem to be the same.

A game tracker normal works with a professional Hunter when on hunting seasons and if they are finished hunting the contract is over. Trackers goes home and wait for the next hunt or next year

And some management on hunting safari camps prefer to use their game scouts as trackers because these scouts are the really people who knows the areas and these must be gun handlers whereas game trackers can be given an area man who will be controlling the trackers on direction and boundaries.

According to my knowledge PARTSON TEKEDESE is tracker not a professional Hunter, THAT'S HE MISSED THIS BUFFALO.

Plus on shooting, you aim your target.

A gun is difficult to aim at endangered buffaloes because a buffalo,a rhino,a leopard and an an elephant are the most dangerous animals to hunters on which if charges before you see it you are gone for good.

I HATED HUNTING WHEN I WAS TWENTY WHEN I SAW A CLIENT BEING DEVOURED BY THE HUNGRY LION IN ONE OF CONSERVANCIES OF ZIMBABWE IN FRONT OF A PH.

Clearly you have never used a gun before,moving targets are easy to miss.