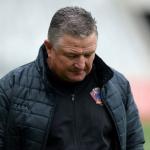 In a statement this Friday, club chairman Siviwe Mpengesi said the club has reached a four months settlement with Hunt. The statement read:

Chippa United has parted ways with coach Gavin Hunt in a mutual and amicable agreement after five months with the club.

We reached an agreement with Gavin Hunt to terminate his contract as Head Coach. Four months settlement was reached between the two parties.

We extend our gratitude and support to Gavin Hunt and wish him the best of luck in his future endeavours.

Hunt is a four-time PSL-winning coach having previously led SuperSport United to three consecutive PSL titles during the 2007/08, 2008/09 and 2009/10 seasons.

Following that, Hunt won the domestic title with Bidvest Wits in the 2016/17 season.

Hunt was initially suspended for one month due to a string of poor results. He had managed one win from the 10 DStv Premiership matches at the time, according to Soccer Laduma.

The 57-year-old has been paid out a settlement of four months because of the decision to part ways just four months into a two-year contract.

He leaves the club second from the bottom of the table after 15 games.