Chin'ono's "Who's In Charge" Question Triggers Warfare With Herman Mashaba 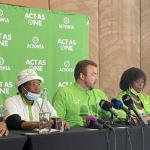 The war of words between Herman Mashaba and Hopewell Chin’ono continued on Wednesday, with Mashaba urging the journalist to focus on “fixing” Zimbabwe before questioning ActionSA’s leadership.

It all started when Chin’ono, who has made world headlines for his criticism of the Zimbabwean government, took to Twitter on Tuesday to post a picture of ActionSA’s leadership. In the caption, he said he came in “peace” and asked, “Who is in charge?”

In response, Mashaba claimed Chin’ono had an “inferiority complex” and urged him not to support “racialised misinformation campaigns”.  He responded:

Please don’t impose your inferiority complex onto me. There are so many challenges in Zimbabwe, why don’t you start there? Perhaps this is why it has been so hard to turn Zim around when “award-winning journalists” find it so easy to support racialised misinformation campaigns.

Chin’ono hit back on Wednesday, claiming his question had nothing to do with race adding that Mashaba’s response exposed the ActionSA leader’s alleged “insecurities” on the topic. He asked:

My question had nothing to do with race. Your response gives away your own insecurities around race! I was asking who was in charge because you were the face of the campaign yet the picture that did rounds had other folks taking center stage. Are you in charge?

Mashaba responded, saying a depth of leadership was “a hallmark of democracy” and urged Chin’ono to “take notes”. He added:

I understand that you are used to demagogues & dictators, but in @Action4SA we are proud to have depth of leadership. This is a hallmark of democracy, so I hope you are taking notes. We are working to fix our country. Work to fix yours. Charity begins at home.

A ceasefire was called after Chin’ono asked Mashaba about the perception that mainly Zimbabweans were being targeted by ActionSA in its policy on illegal immigration.

The party responded to Chin’ono’s question by saying: “As ActionSA, we welcome the people of the world, but they must come here legally, and when they are here, they must respect our laws. No country can thrive in a state of lawlessness.”

In 2020, Mashaba said South Africa should adopt harsh policies against illegal immigrants. Some believe the group has largely been targeting millions of Zimbabweans in South Africa.

It appears that many people spoke at the conference which meant they had to rotate their seats because of the microphones that were centralised. Chin’ono picked one of the photos from the conference and it was of a white person seating in front of the mics.

They know what to promise to their people so that they can get votes e.g SA's thinks foregners are the problem

ActionSA is a gud party with a very bad foreign policy (against immigration)... Anyway, they will not taste victory in Presidential erections.