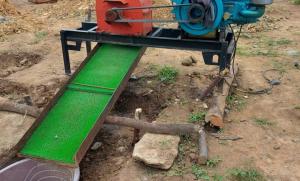 The Environmental Management Authority (EMA) working with the provincial mining office and the Zimbabwe Republic Police (ZRP) have ordered the company to leave the ranch, owned by Philip Mpofu.

In spite of being issued with tickets and orders twice, the group continued mining illegally and they did not have an Environment Impact Assessment (EIA) Report.

The first time we found them doing alluvial mining on a river bed, we removed them and issued a ticket.

They then moved to the next site where they bought a mine illegally to continue their operations.

We also gave them a ticket and an order. The next move is to go with the police and arrest them.

Now we will open a docket and have them arrested because we understand they are back again.

When you tell someone to stop mining you expect them to stop but they have not, meaning they are disrespecting our procedures.

They must stop their illegal activities and they don’t even have an EIA.

Ministry of Mines and Mining Development Matabeleland South Provincial Mining Director Khumbulani Mlangeni confirmed the matter when contacted for a comment by CITE. He said:

Yes, we wrote a letter to the police to that effect. When we received the complaint we went to the ground and we established they are not supposed to be mining anywhere.

They (the Chinese) claim to have applied for a special grant and they were mining within a river bed, which is banned nationally.

So we wrote a letter to the police at the time we received the complaint last year. I’m not sure if the police have acted yet but this morning Mr Mpofu said there are still people there.

The owner of the ranch, Mpofu, want the Chinese to move out of his property, as they are causing environmental degradation.

Firimoni CCC is your way out of your miserable impoverished hopeless life. If you can't do it for yourself do it for your parents, because as far as Zim situation is concerned Im pretty sure your parents are tired of your presence in their house. It's high time you wake up do something with your life, All CCC is trying to do is to give you an opportunity, a chance for a better life, a better destiny. CCC is here to allow you to enjoy your dream by living it. How hard can that be. My Brother wake up, don't you get tired of your same routines.

#Proudly a Citizen for Change 👍