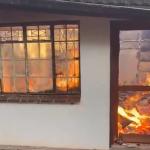 The ZANU PF secretary for finance and acting political commissar Patrick Chinamasa’s Borrowdale home suffered extensive damage from a fire that broke out on Friday afternoon.

Firefighters responded to the inferno between 3.30 and 4 PM and managed to save part of the house from destruction.

Chinamasa revealed that his one-year-old grandson was rescued unharmed from the main bedroom where the fire was first detected following what he described as a “boom sound”.

He, however, ruled out foul play, and described the fire as “an accident, an act of God.” Chinamasa said in a statement:

Thank God the child’s mother, who had just arrived back from work, and the housekeeper managed to rescue the baby.

The main bedroom, the bedroom where the fire originated from and my study were all gutted by the fire and reduced to ashes. Nothing was saved from these rooms.

The Fire Brigade arrived in time to save the dining room, the lounge, the kitchen and the two remaining bedrooms.

As to the cause of the fire, I am suspecting an electrical fault. I am ruling out completely any foul play.

Enemies may celebrate my misfortune but I believe there was no enemy hand behind this incident.

I know social media will be awash with all sorts of speculations. This I have no power to stop.

What I know from the bottom of my heart is that this was an accident, an act of God.

Chinamasa said he had been left “severely traumatised” by the incident, which he said destroyed all that he had worked for over the years, leaving him with only the clothes on his back. He added:

It’s not easy to accept that what we have worked for all our lives has gone up in smoke in a matter of seconds.

All that we have remained with are the clothes we were wearing. The furniture, clothes, blankets, files, documents, records, manuscripts, family photos… everything, and above all my priceless and irreplaceable library is now just a heap of ash and rubble.

Chinamasa invoked the biblical Job whose story of keeping the faith no matter how grim the circumstances of life inspires Christians. He said:

In conversations with friends and relatives, I find myself fielding Job-like questions but I want to assure all who care for my welfare that in God I trust and he will provide.

Chinamasa has experienced his fair share of misfortunes in recent months. In July this year, he was involved in a car crash at the 12-kilometre peg after Rusape, before the tollgate, and spent some time in hospital recovering from his injuries.

Speaking from his hospital bed, Chinamasa said he escaped death by the skin of his teeth but urged people not to panic. He added:

I was saved by the airbags, otherwise, we will be talking about something else.