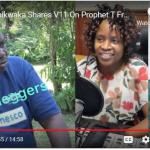 He said Freddy made a U-turn and sought to return to Harare but the police officers who were manning a roadblock, at the instruction of Chief Chikwaka, blocked him and brought him back.

He said Freddy confessed that he indeed slept with Rutendo without her consent.

I called Freddy after Rutendo had told me about the alleged rape. I told him "I am coming to you as your Sekuru, come let's discuss this issue that Rutendo has brought before us. She says you are distressing her."

He said he was busy and I told him it was for his benefit to make his side of the story known to us as Rutendo was threatening to get him arrested. He accepted and made the journey here.

But because the issues involved an alleged rape, I alerted the police so they would attend the meeting and start an investigation. 3 officers were dispatched.

Freddy drove down that night and he was met by our security guard. He however left soon after after the security guard came to advise us of his arrival.

My interest in the matter was that of a Sekuru as Rutendo is my distant relative. I was not coming in as an officer of the law as they are not resident under my jurisidiction as chief. That's why I did not issue any summons. He came voluntarily.

We didn't know why he had decided to drive back so we asked the police at the roadblock to intercept him and they did.

We followed him to the roadblock and asked him why he had fled. He said he had panicked because of my sizeable chief's residence and the security there.

I told him he had erred as the allegations against him were serious. He agreed to return with us to my homestead.

At home we sat him down an explained the the allegations Rutendo had against him.

He confessed that he had indeed raped Rutendo.

Rutendo had also told us that Freddy was inteferring with her work accusing her of being involved with other men at the ZBC.

Freddy asked for forgiveness and signed a piece of paper agreeing to not interfere with Rutendo's life and work. In exchange Rutendo would not proceed with the rape allegations. He agreed that if he did not live up to the agreement, Rutendo report the rape to the police.

However I also told Freddy I would advise Rutendo's parents of the issue. They both left.

When I advised Rutendo's close relatives of the issue, they said they did not want anything to do with Freddy.

Some days later I called Rutendo and Freddy back to my homestead to update them and also get an update from them. To my surprise they had changed their story. Rutendo said the two of them had agreed to get back together, even though they'd not be getting married. But then when i asked further she said Freddy had sweet talked her into that position just before they came to see me.

I told Freddy to stop playing games. I also told Freddy to stop inteferring with Rutendo's life. I told him he was an adulterer and hypocrite. He then started telling me about his sick child and how life was not going well for him. After promising not to intefere with Rutendo again, we concliuded the matter and they both left. The agreement was that they would not see each other anymore.

I was shocked to find the matter of extortion in the newspapers some days later. I called Rutendo and she told me she had been arrested. She said Freddy had set her up by offering to give her a car. Even though she had refused the car Freddy had left the car at her home together with the keys as compensation for the distress she had caused him. He had also offered $20,000. Rutendo said when she travelled to Freddy's place to give him back his car keys, she was then arrested on the extortion charges.

I told Rutendo I was surprised she had continued to communicate with Freddy after we had concluded the opposite at our last meeting.

US$0 Harare
King Kong 6 months ago

PINDULA ADMIN, PLEASE DO SOMETHING ABOUT VULGAR LANGUAGE HMMMMM I SEE THIS AFFECTING THIS PLATFORM NEGATIVELY VERY SOON. PLEASE, PLEASE OBSCENE WORDS ARE BECOMING TOO MUCH.

Now waiting for the rising of a new prophet...but what a sad ending to the story of Mbinga Yemashuwa.