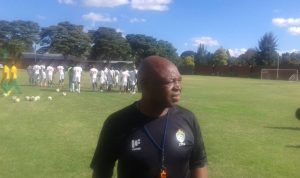 Former Warriors and Dynamos coach Sunday “Mhofu” Chidzambga has backed Norman Mapeza to continue as the national team coach despite his failure to revive the Warriors’ 2022 World Cup qualifying campaign or to reach the knockout stages of the 2021 Africa Cup of Nations (AFCON) finals in Cameroon.

Chidzambga, who took the Warriors to two AFCON finals, in 2004 and 2019, believes that one of the reasons behind the Warriors’ poor performances at tournaments is a lack of continuity in the technical department. Said Chidzambga:

I think our problem lies in the system we have in place. We don’t have a sound junior policy to ensure we continue to produce more talent.

The other problem is that we keep changing coaches, we don’t believe in continuity.

So it becomes difficult for us to progress as a football nation under these circumstances. Look at Germany, how long have they been with Joachim Löw, 15 years.

I believe Mapeza should be given the chance to continue and we put the right systems in place if we are to succeed as a nation.

Mapeza is not a good coach at all ,he's winning the domestic league coz of the money that the club owners posses otherwise wen the team goes continental they are clobbered by astronomical scorelines which clearly shows the gap between his technical capabilities against other moneybags ,so that man can not be National team coach material.

Iimaz shut up where did you learn your football ⚽️

I back all those suggesting Nomara's re-Appointed, honestly he deserves it thogh he has some shortfalls esp on the issue of SUBSTITUTIONS. However i understand the reason why, he wants to maintain tbe players that he knows most, so if he be given another mandate i believe he will have time to study player capabilities and be able to tap into the players talents & power spots
Mapeza i still believe he can do it nyangwe zvangu ndaka chemawo naye pama previous games,

on the same note, may zifa quickly introduce what i want to term as the JUNIOR POOL where the NATIONAL COACH gets players and also the SENIOR POOL that will assist him in identifying talent se-COUNCIL OF FOOTBALL LEGENDS yambo taurwa iya from which the entire leadership will be elected thus
Coaches
Assistants
Executives and the
President

in conclusion i say