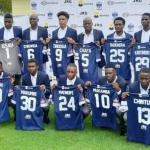 Zvishavane-based FC Platinum emerged victors when they clashed with Harare giants, Dynamos in a Chibuku Super Cup match on Sunday at the National Sports Stadium to book a Chibuku Super Cup final place against Ngezi Platinum Stars at a date and venue yet to be announced.

Kugona Kunenge Kudada were the best side in the first 45 minutes but all their efforts to bury the match early went in vain as they could not get past the rock-solid Dynamos defense.

DeMbare, however, came back stronger in the second half but still, they too could not break the deadlock in a semi-final which had very few clear cut goal-scoring opportunities as both coaches exhibited some good tactical acumen.

The two sides could not be separated in regulation time and the game had to go to extra time.

And finally, the deadlock was broken with just a minute before the first half of the extra 30 minutes when former Caps United midfielder Innocent Mucheneka converted from a free-kick giving Dynamo’s goal minder Tymon Mvula no chance while sparking wild celebrations from their supporters.

The defeat was Dynamos’ first in this tournament and sadly at this stage, it marked the end of the road for the Glamour Boys who had been so dominant in this year’s edition of the Chibuku Super Cup after going for 12 games without tasting defeat.

It will be the third time that these two sides will meet in this year’s tournament following their two previous meetings in the group stages at Mandava Stadium in Zvishavane.