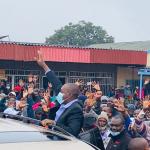 President Emmerson Mnangagwa’s spokesman George Charamba says he will expose an altercation between MDC Alliance leader Nelson Chamisa and his security detail. He did not reveal where and when the alleged quarrel took place or what it was about.

Posting on Twitter using his @Jamwanda2 handle, Charamba promised to release recordings of the alleged altercation between Chamisa and his aide. Wrote Charamba:

We have recordings of an altercation between Chamisa and his security detail who tries in vain to knock sense into the drama-comedian!!! We shall release it in due course zvedu!!!!!

Charamba also claimed that Chamisa does not want imminent by-elections as well as the 2023 general elections in the hope that “he recovers lost ground”. Said Charamba:

IN CASE YOU DON’T KNOW: Chamisa haadi maELECTIONS. GET IT FROM ME. ZVESE INCLUDING THOSE BACKING HIM. THEY WANT A HOLDING POSITION WHILE THEY HOPE HE RECOVERS LOST GROUND. NOTHING WILL BE SPARED TO DERAIL 2023: PSEUDO-EVENTS ON NEVER-NEVER VIOLENCE; ELECTORAL SABBATICALS; NTAs…and DESTABILISATION OF OUR CURRENCY.

Meanwhile, we determinedly forge ahead with preparations for elections, starting with COVID-19-stalled by-elections!! We did not make appointments for full ZEC for nothing. Voter registration, delimitation are set to start soon. Antics or no antics, ZIMBABWE GOES POLLING!!!

Phoney challenges on the President’s legitimacy and much more court cases to stop elections being mulled, ZIMBABWE GOES A-POLLING. KNOW THIS ALL YE MEN AND WOMEN!!!!!

Responding to a Twitter user who had advised him to move on from Chamisa since he has no “MP, Cllrs, Party name and even Party building”, Charamba said:

Scores of MDC Alliance MPs and councillors have been recalled by the MDC-T under Thokozani Khupe and her successor Douglas Komichi, leaving their seats without representatives.

According to online sources, in Russian culture, kompromat, short for “compromising material”, is damaging information about a politician, a businessperson, or other public figure, which may be used to create negative publicity, as well as for blackmail, often to exert influence rather than monetary gain, and extortion.

Haaa paphone number section apo surely you scare people from commenting. Bvisai that part and see how people will give comments. Zvinotyisa zvokwadi.

Mugabe once said ,I am powerful than than Jesus saka zveavo Vanopenga siyanai navo President Nelson David Moses Chamisa is going to defite Goliath and pull out the tortured Zimbabweans from the cruel Pharaoh

The fire fighter at work

Wen ever you open your mouth you vomit rubbish !!!!

We will be watching how it unfolds