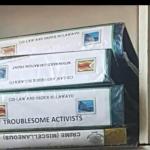 They were hauled before Harare magistrate Zvidzayi Mateko on Tuesday facing charges of insulting police officers and were released on $5 000 bail each.

The matter was postponed to 14 December 2021 for trial.

The accused, who were represented by Noble Chinhanu of the Zimbabwe Human Rights NGO Forum, denied the charge.

Prosecutors alleged that the six MDC Alliance members insulted police officers saying they (police officers) are being used and will die poor. The charge sheet read in part:

The alleged incident happened on Sunday in Epworth, where opposition activists had gathered for a meeting.

Makoni, who is the oldest among the six suspects, is alleged to have been the first to utter the insulting words and the other accused persons “echoed the same words repeatedly towards the complainant (Tambudzai Dzumbunu, a police officer) and her colleagues”, the State outline read.

The complainant felt insulted by the accused persons’ utterances and filed a report at the ZRP Epworth.

Well Done Officer your promotion is around the Corner and the judgement Day is Doom:
😭😭😭😭😭

They were arrested for telling the truth

Who let those dogs out whoooo whoooo