Chamisa Speaks On “The Rise Of ZANU PF Vigilante Groups” 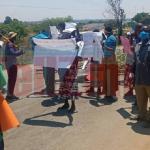 The leader of opposition MDC Alliance, Nelson Chamisa has said there is an emergence of ZANU PF vigilante groups who are engaging in political violence without being punished.

He speaks amid reports that a convoy of his aides was blocked and attacked when it travelled to Masvingo Province for his provincial tour this week.

MDC Alliance claims the assailants were ZANU PF hooligans. ZANU PF denies the allegations suggesting that the opposition party staged the attack, that left some of the MDC vehicles damaged, to soil the image of the governing party.

THE RISE OF VIGILANTISM IN ZIMBABWE…

The recent inter-arty and intraparty political violence that rocked come as Zimbabwe is scheduled to have general elections in 2023.

Some political analysts have predicted that the elections will likely be marred by violence, like in 2008.

Stakeholders including the Zimbabwe Human Rights NGO Forum have castigated the violence within ZANU PF and against the opposition saying it affects democracy.