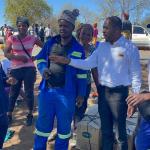 MDC Alliance leader Nelson Chamisa on Tuesday said an attack on his convoy in Masvingo a day earlier by ZANU PF supporters is a primitive form of engagement and tarnishes the image of the country.

Chamisa addressed the attack in Charumbira, Masvingo province, for the first time during a news conference.

The attack by a mob of about 200 placard-waving mobs left five supporters, including a councillor, injured and one of his security vehicles was badly damaged.

Chamisa said the mob had been mobilised by ZANU PF and bribed with food to stage a protest against sanctions. He said:

I mean what they did yesterday, bringing burning logs to barricade the road, are primitive things.

You don’t do such things. It damages and tarnishes the image of the country. We have a country being reduced to stone-age engagement.

Mr Chamisa imposed himself on the Masvingo audience seeking to address them without their consent.

What I hear happened in Masvingo was that the opposition leader was trying to impose himself to an audience that did not want to listen to him.

He had no right to force people to listen to him. He had a right to address people, but only those who were willing to be addressed by him.

In this case, the information I received is that the villagers did not want to be addressed by him for obvious reasons.

If you listen to a mad man, you become part of his cast. Our Zanu PF people had a right to refuse to be addressed. It’s their right.

Chamisa alleged that most of the demonstrators were drunk after being plied with alcohol overnight and then being driven to the location where they blocked his passage.

ZANU PF supporter Nhamoinesu Nemanwa was named as one of the ring leaders that orchestrated the attack.