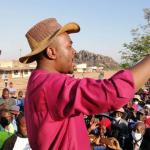 The development has been seen as a move aimed at preventing further defections after the party lost several of its councillors to rival MDC-T led by Douglas Mwonzora.

The persuasion happened at a meeting for the members of the provincial administrative committee held at the party’s offices in Mzari.

The councillors reaffirmed their undying loyalty to the MDC Alliance led by President Nelson Chamisa. They also pledged to work hard to achieve the six million vote (for the 2023 presidential election).

The councillors have also voiced their displeasure at Douglas Mwonzora for robbing the people’s victory by illegally recalling MDC Alliance deployees.

NewZimbabwe was told that MDC Alliance is targeting to purge “sell-outs” in various councils who defected to MDC-T which has taken control of Chegutu.

In September this year, the Mwonzora-aligned councillors at Municipality of Chegutu nominated and appointed Ward Six councillor Dadirai Guyo as the town’s new deputy mayor, a development that reportedly rattled Chamisa and his national executive.

Chegutu mayor Henry Muchatibaya, who is also aligned to Mwonzora, said the opposition movement would clinch all political leadership positions in the town.

Elections are around the corner.Team Mwonzora is to buried.

Unonyeba iwe Mwonzora. Come elections, we are going to root you out of Chegutu