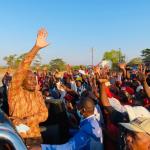 MDC Alliance leader Nelson Chamisa has hinted that the opposition party will adopt a new name and new colours.

Since its formation in 1999, the MDC has used red as its main colour, as well as white and black.

In a tweet on Thursday, while holding yellow, orange and blue umbrellas, Chamisa said:

Colour is language, colour lights up the environment and illuminates the atmosphere.

The future is exciting. We must be different but which colour is the future? Green, Red, Blue,Orange, White or Yellow?

The MDC Alliance is racing to put its house in order with by-elections looming.

The MDC-T led by Douglas Mwonzora said it will use the MDC Alliance as its name in elections, leaving Chamisa’s party without a name.

On Tuesday, President Emmerson Mnangagwa said he would proclaim a date for the delayed by-elections in early January next year.

Chamisa’s party has lost the party name, headquarters and provincial offices including state funding under the Political Parties (Finance) Act to the MDC-T.

Speaking to NewsDay yesterday, MDC-T spokesperson Witness Dube said they will not allow Chamisa to use the MDC Alliance brand. Said, Dube:

We are the Alliance principals and we are unambiguous. We are a constitutional democracy and they may not have all their prayers answered through unconstitutional means.

They said they (MDC Alliance) will have Harvest House (party headquarters) we had it.

They said they will have the funds under the Political Parties (Finance) Act, we got that.

They said they will have to recall our MPs, we recalled errant members of our party and we are not moved by any words now. The time of reckoning is now.

Slow motion and hesitancy may undo ana Chamisa. Just do it. Ipapa uchaona another person atomhanya kunoita register again their party in the name they intend to use. Act fast.
Time ain't on your side. Otherwise, kusvasvanga chete.

US$8.00 Chitungwiza
Johan mubhabhatidzi 5 months ago

MDC ALLIANCE IS DELAYING IN GIVING THEIR PARTY A NEW UNDISPUTED NAME BECAUSE THE NAME MDC ALLIANCE HAS BEEN CORRUPTED BY CAMARADA MWONZORA WHO IS ANGLING TO USE THE NAME IN FUTURE ELECTIONS.

I FEEL THAT PRESIDENT CHAMISA IS RACING AGAINST THE TIME. HE MUST USE HIS PARTY'S NEW NAME TO ACCLIMATISE HIS SUPPORTERS WITH THE NEW NAME IN THE UPCOMING BYELECTIONS.

PEOPLE IN ZIMBABWE HAVE NOW GROWN IN POLITICS. I AM HOPING THAT THEY WILL QUICKLY ACCLIMATISE WITH THE NAME OF PRESIDENT CHAMISA'S PARTY NEW NAME. PRESIDENT MWONZORA OF MDC T THINKS POLITICAL SUPPORT RESIDES IN THE NAME OF THE PARTY. I WANT TO ADVISE HIM FOR FREE THAT HE IS GOING TO BE DISAPPOINTED IN THE BYELECTIONS.

THE FEELINGS OF MOST PEOPLE IN THE STREETS IS THAT MWONZORA IS AN APPENDAGE OF A CERTAIN POLITICAL PARTY WHICH HAS EMPLOYED HIM TO DESTABILISE MDC ALLIANCE OF PRESIDENT CHAMISA. THIS IS FOOD FOR THOUGHT LADIES AND GENTLEMEN. I AM NOT PRIVY TO THIS FEELING.

PRESIDENT CHAMISA SHOULD ANNOUNCE HIS NEW NAME IN TIME TO ACCLIMATISE HIS SUPPORTERS WITH HIS NEW NAME, LOGO, PICTURES, COLOURS AND SLOGANS.

A saviour will be born amongst them they will try to kill him .They will label him a Rebel.At the end light always drive away darkness.Rima rinodzingwa nechiedza.Muzondifonera