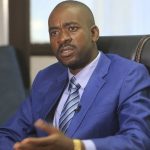 Knox Chitiyo, an associate fellow at the UK-based Chatham House Africa Programme this week said MDC Alliance leader, Nelson Chamisa, is desperate for parliamentary and local council by-elections to regain some credibility as Zimbabwe heads towards the 2023 national elections.

Chitiyo was speaking on the Political Economy and Business Environment in Zimbabwe hosted by African Business.

Over 60 MPs and 80 councillors MDC Alliance were recalled from office by the rival MDC-T led by Douglas Mwonzora for “ceasing to be MDC-T members.”

Chitiyo said the MDC Alliance had also been hit hard by Covid-19 as the opposition party was unable to hold public meetings and had in the process lost considerable support.

The academic, however, admitted Chamisa still had considerable influence among the young urban community. Most of the MDC MPs and councillors who were recalled were elected in urban constituencies. Chitiyo said:

General elections are scheduled for 2023. There are supposed to be by-elections, but because of Covid, we don’t know if and when they will happen. Chamisa is really desperate for by-elections because he feels he might win some and regain some credibility.

Overall, the Chamisa opposition has lost quite a lot of ground. It’s possible they might claw it back when Covid ends, but he’s got a lot of work to do.

President Emmerson Mnangagwa last year banned the Zimbabwe Electoral Commission (ZEC) from holding by-elections as part of the government’s efforts to contain the spread of the deadly Covid-19 global pandemic.

Meanwhile, Chitiyo also doubted Mnangagwa’s continued grip on power as Zimbabwe’s leader due to high-level corruption in government, and the worsening political and socio-economic crises in the country.

Chitiyo added that Mnangagwa’s age and the tensions between him and Vice President Chiwenga are a factor.