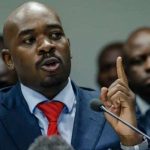 Chamisa, who is a former minister of I.C.T., Postal and Courier Services, is in Manicaland touring the province. The alleged blockade comes barely hours after MDC Alliance claimed that Chamisa was narrowly missed by a bullet shot at his car in an attempted assassination attempt. MDC Alliance announced this Wednesday:

Reports suggest that the mob tried to block Chamisa’s path with a diagonally parked Mitsubishi with its bonnet open.

Surprisingly, the alleged attacks come when a United Nations special rapporteur, Alena Douhan, is in the country to assess the impact of sanctions that were imposed on the country over the deteriorating democratic space.

Douhan’s report will likely result in the removal of sanctions if there is proof that the sanctions are affecting the general populace.

Meanwhile, the United States and her allies that imposed sanctions on Zimbabwe are adamant that the measures are will only be removed when or if Zimbabwe reforms.

The alleged attacks are detrimental to the government.