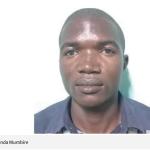 The two remaining suspects in the gang of seven that recently raided a Chadcombe house belonging to a retired CID Homicide detective Mr Joseph Nemaisa, after allegedly targeting the wrong house, are now believed to have fled to Mozambique.

The two on the police most wanted list for being part of the gang are Washington Hamandishe and Tatenda Mumbire.

Recently, three other gang members were shot dead by Mr Nemaisa at his Chadcombe home and two gang members have been arrested, along with an employee of the householder a few doors away who was believed to have been the target.

On Monday, detectives from the CID Homicide arrested Job Tayero (37) on allegations of assisting Hamandishe and Mumbire to escape to Mozambique.

Tayero was arrested at Hamandishe’s house in Domboshava where he had been sent by the suspected robber to take some of his property and belongings. It is believed that he wanted to take them to Mozambique.

Acting on a tip-off, detectives raided the house and arrested Tayero who then revealed that the two wanted suspects were hiding in Mozambique to evade arrest.

Tayero appeared in court on Tuesday facing charges of assisting an accused person who has committed an offence and he was remanded in custody, as investigations continue.

The man who allegedly sold out his employer to the gang of armed robbers that later on mistakenly stormed the Chadcombe house of Mr Nemaisa, had only been employed for three weeks before he orchestrated the armed robbery.

Shine Nyamhunga (21), who is employed by Top parts and Tyres in Harare, was over the weekend not asked to plead to robbery when he appeared before magistrate Ms Judith Taruvinga.

He was remanded in custody to December 28.

Allegations are that on December 6 at around 8.45 pm Nyamhunga and the robbery gang planned to rob Ms Patience Matonzi with Nyamhunga giving the gang directions to Ms Matonzi’s house. But the gang missed their target and mistakenly pounced on Mr Nemaisa’s family.

Investigations revealed that Nyamhunga of Arcadia was employed by Ms Matonzi a few weeks ago to work in one of her shops.

The day of the robbery was the first time that Nyamhunga had visited Ms Matonzi’s house and he gave Tariro Gora, one of the dead robbers, details of recent cash transactions at Ms Matonzi’s business.

The gang has been linked to five armed robberies in Marondera, Belvedere, Hatfield, Cold Comfort and Mabelreign in Harare, where property worth over US$52 300 was stolen.

The problem lies with our system why would a notorious serial robber be granted bail,these lawyers who purport to represent these robbers are not upholding the true attributes of law but are just after money.Imgine a murder,a robber who killed in the process being given bail only to dissappear for good,shame who is to blame.

Such rogues should wake up and see that in terms of thuggery, sooner or later they will meet their superiors in the game. Just as has been happenning to ther thugs recently.. virtually all behind bars or in demise.

I HAVE LIMITED KNOWLEDGE IN POLICE INVESTIGATIONS. I AM FAILING TO UNDERSTAND WHY SOME OF THIS SENSITIVE INFORMATION HAS FOUND ITS WAY IN SOCIAL MEDIA BEFORE FULL INVESTIGATIONS HAVE BEEN CARRIED OUT. OR IS IT A MATTER OF JUMPING THE GUN BY THE SOCIAL MEDIA ?

THE LITTLE KNOWLEDGE I HAVE IN INVESTIGATIONS TELLS ME THAT POLICE SHOULD HAVE TAKEN TAYERO TO MOZAMBIQUE FIRST FOR INDICATIONS OF HAMANDISHE'S HIDEOUT IN AN EFFORT TO APPREHENDED HIM.

IF IT IS TRUE THAT TAYERO HAS ALREADY APPEARED IN COURT FACING CHARGES OF ACCESSORY AFTER THE FACT, THEN HAMANDISHE IS PLEASED IN MOZAMBIQUE WHERE HE IS. HE HAS ALREADY SWITCHED TO ANOTHER HIDEOUT.

[TO ERR IS HUMAN, BUT TO FORGIVE IS DEVINE ].