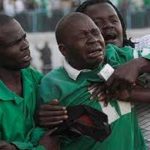 The local league is set to resume after a two-year absence due to the coronavirus. Matches are set to kick off this Saturday, November 6, 2021.

CAPS were eliminated from the Chibuku Super Cup at the group stage, with only two wins in 10 matches.

The Harare giants say that a new coach will be announced soon.

Some said while Makepekepe failed to produce the required under Dodo’s charge, the issues bedevilling the club go beyond the coach and there will be no good result as long as the challenges are not addressed.

They said the owners have in the past made many errors that are affecting the club as a whole.

Some said Lloyd Chitembwe should be hired back.

CAPS UNITED DON'T BE LIKE ZIFA PLAY IT LOW AND RISE AGAIN . COACHES , LEADERS COME AND GO BUT TAKE YOUR TIME TO FIND A GOOD REPLACEMENT DONT RUSH NO NO ALL THE BEST

I agree with you Ras players' welfare is mandatory we can say this and that but our machine needs lubrications esp inside @babachanana green machine fan.

Cry our beloved Green Machine. Gwalangwa to the players is the missing tonic. Address players' welfare issues holistically and the days of wine and glory will be back.