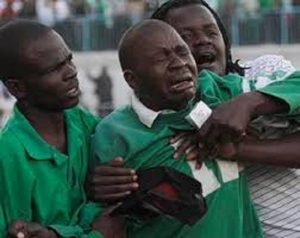 Several players are reported to be on the verge of leaving Caps United as the club is struggling to meet the costs of running its operations.

Since the onset of the COVID-19 pandemic, some local clubs have been struggling to meet their operation costs, with players going for months without receiving their wages.

Caps United is one of the three biggest clubs in Zimbabwe but unlike rivals, Dynamos and Highlanders, who are sponsored by Sakunda Holdings, the Green Machine is financed from the pockets of their owners, Farai Jere and Nhamo Tutisani.

H-Metro reported a source at the club as saying some Makepekepe players are even willing to join Division One sides, with some already at Simba Bhora.

Brandon Mpofu has moved across town to join rivals DeMbare.

Caps United was sponsored nevana vavaMugabe , hw can they sponsor Caps United imi muchivanhundutsira senge vanoda Kuta mapresident look at the coach they use. Robert junior requested that team from his father when he asked him what he wants on his birthday he said buy me Caps United and Twine Phiri alongside

I AM AN ARDENT SOCCER SUPPORTER. IN ZIMBABWE SOCCER WILL NEVER BE THE SAME AGAIN WITHOUT CAPS UNITED IN THE SUPER LEAGUE.

CAPS UNITED HAS FAILED TO ATTRACT SPONSORSHIP BECAUSE IT IS PERSONALLY OWNED BY JERE AND TUTISANI UNLIKE HIGHLANDERS AND DYNAMOS WHO ARE COMMUNITY OWNED.

CAPS UNUTED IS A GOOD CLUB. I DO NOT KNOW WHY JERE SND TUTISANI ARE FAILING TO SECURE A SPONSOR.

US$0 Harare
Bright 4 months ago