By-elections A Waste Of Time And Resources, Says Chinamasa 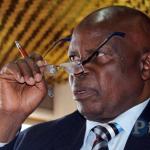 The holding by-elections barely a year to the 2023 harmonised polls would be a waste of time and resources, ZANU PF acting national commissar Patrick Chinamasa has said.

His remarks come after President Emmerson Mnangagwa announced on Wednesday that by-elections would now be held early next year.

However, Chinamasa claimed that while ZANU PF would take the opportunity to “wallop” opposition parties, the exercise would be an unnecessary drain on national resources. He said:

ZANU PF wishes it to be known loud and clear that it is ready to wallop opposition parties by whatever name called and will take no prisoners.

But it must be put on record that the by-elections, when promulgated will take place with barely a year to go before the 2023 harmonised elections, a complete waste of taxpayers’ money.

Notwithstanding, it is, however, Zanu PF’s primary revolutionary duty to politically bury counter-revolutionary, anti-people sanctions seeking, political sellout outfits masquerading as democratic change-makers and this duty has to be performed anytime anywhere.

Meanwhile, the MDC Alliance said the by-elections were likely to produce a disputed outcome if held before the implementation of electoral reforms. She said:

The consistent position that has been taken by the MDC Alliance is that any proclamation for elections must be accompanied by a clear reform roadmap that paves the way for an undisputed election.

To set an election date without addressing the vexed electoral reform question is to put the cart before the horse. The need for reforms is non-negotiable.

We are comfortable with elections coming. We were ready for elections when we made the recalls, however, it must always be known that we believe we need electoral reforms before any elections can take place.

There is enough time to effect those reforms so that we don’t have a broken record whereby after every election there is always the question of legitimacy hanging over our political horizon.

The recall of 133 MDC Alliance MPs and councillors, and the death of several legislators have necessitated the holding of by-elections.

ZANU PF ACTING POLITICAL COMMISSAR, CAMARADA PATRICK CHINAMASA, IS A VtERY EXPERIENCED LAWYER, BUT WHAT COMES OUT HIS BIG MOUTH DOES NOT RESONATE WITH HIS PROFESSION AND EXPERIENCE. AT ONE TIME HE HAD A TIFF WITH THE AMERICAN AMBASSADOR BECAUSE OF HIS UNDEPLOMATIC LANGUAGE.

THE LAW SAYS A BY-ELECTION MUST BE HELD WHEN A MEMBER OF PARLIAMENT OR A COUNSELOR DIES, IS REMOVED OR IS INCAPACITATED. THE LAW DOES NOT GIVE TIMEFRAME. THE IMPLICATION THEN IS THAT AS SOON AS POSSIBLE. IT IS UNCONSTITUTIONAL TO LEAVE SOME PEOPLE STAY WITHOUT REPRESENTATION IN PARLIAMENT OR COUNCIL.

YES, THESE BYELECTIONS COST MONEY TO DO THEM. IT IS GOVERNMENT'S DUTY TO LOOK FOR THAT MONEY. GIVE THAT RESPONSIBILITY TO CAMARADA MTHULI NCUBE. HE WILL FIND THAT MONEY.

HATS OFF TO YOU CAMARADA WITNESS DUBE, MDC T SPOKESPERSON, FOR ADVOCATING FOR POLITICAL REFORMS. I THOUGHT YOU WERE GOING TO CLING TO YOUR IDEA OF UNITY GOVERNMENT. I ALSO NOTED THAT MDC ALLIANCE ARE ALSO IN FAVOUR OF DOING POLITICAL REFORMS FIRST BEFORE THE BYELECTIONS. NO, THAT IS A BAD IDEA. ZANU PF IS INTRANSIGENT. THEY ARE MAJORITY IN PARLIAMENT. ANY BILL CAN PASS AT THEIR MERCY ONLY. LET US LEGALLY FORCE THEM TO REFORM WHILE WE HOLD ELECTIONS WHEN THEY ARE DUE.

US$0 Harare
Kuku 6 months ago

Let's priorities a health economy - its the panancia for our troubles - let's spend less, and invest more

With me I support him truly wast of Time and for the # Cowboy advantage just because Mu 🤠 ka all your strategy was going to be exposed so keep the Cards close to your chest. # When the Cowboy goes to the Village 💪💯💯 Register to VOTE my Friend ✖️