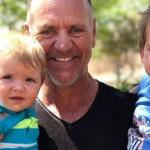 Rusty Labuschagne, a South African businessman who spent ten years in Zimbabwean prisons after being convicted of murder, which he denied committing, has written a book narrating his ordeal.

He said he does not have any anger despite being “wrongfully” convicted.

The 60-year-old Labuschagne, a successful businessman, who ran a safari outfit, was accused of drowning a poacher near his fish resort in Zimbabwe in late December 2000.

He was sentenced to 15 years in a Zimbabwe jail and was moved around to various prisons in the country.

He spent hundreds of thousands of rand trying to prove his innocence and fighting the system.

Eventually, after 10 years, Labuschagne was released from prison. He said he went on a fishing trip with his friends, including Spike Claasen, on Lake Kariba in December 2000. He narrated:

On our way back, we spotted two fish poachers in a steel boat, who immediately, upon seeing us, started paddling hastily for the shore in an effort to get away from us.

Knowing that they were notorious poachers, I drove my boat towards them to scare them off, and the wake of my boat tilted theirs, causing them to jump out into the water, which was about 1.5m deep.

They were about three metres from the shore and soon scrambled to dry land.

Spike and I then watched as they ran away into the bush, and thought nothing more of it.

The following day the police arrived and accused them of drowning one of those poachers. He said one of the poacher, the police, and the courts, framed him adding that this was a “politically influenced conspiracy.”

He was sentenced to 15 years five of which were suspended as remission. His friend, Spike, only got a US$10 fine and was set free because he was not driving the boat.

Labuschagne has written about his experience in his new book, Beating Chains, an inspiring story of hope and resilience.

Labuschagne, who now resides in Cape Town with his wife Sandra, and does motivational talks for corporates, private functions, and churches, says his book was written for people who are overcoming hardships and to have the injustice recorded.

He says finding happiness in even the smallest of things in prison kept his mind healthy.

While Labuschagne is happy to be free and now lives a wonderful life with his wife, Sandra, he says he is still scarred.

Labuschagne adds that he also visited the president of Zimbabwe in 2018 for a presidential pardon and President Emmerson Mnangagwa instructed the minister of justice to find a legal way of pardoning him.

However, the feedback he got after a year was that people were upset because he had gone directly to Mnangagwa.

sorry sir .only God knows the truth.i wish i could have a copy of your book.