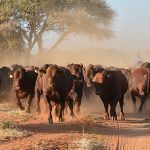 The Zimbabwe Republic Police (ZRP) has announced the arrest of a Gwanda businessman and butchery operator for stock theft after he and his employees were found in possession of slaughtered and live beasts.

In a statement on the case, police said the beasts were identified by the owners. Reads the police statement:

The Police in Gwanda has arrested a businessman and butchery operator Irimai Muringa of Konongwe Farming area for stock theft after the suspect and his four employees were found in possession of three carcasses & two live beasts which were all identified by owners.

Stock theft has been rampant across the country in recent times.

Some would steal and sell the loot to butcheries while some are stealing to add to their herds.

There have been reports that some Zimbabweans nationals were stealing as far as Botswana prompting that country’s presidency to order an official inquiry into livestock theft on that country’s border with Zimbabwe.

ZRP reported last week that over 95 cattle worth US$60 000 had been stolen from the Cold Storage Commission (CSC) Dubani Ranch in Colleen Bawn, Matabeleland South between 4 April and 21 November this year.

Scores of people are being arrested for stock theft across the country.

Hamba BUTCHER MAN
YOU REACH YOUR TARGETS BY STEALING. KKKKKKK