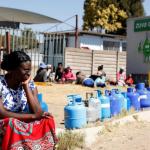 A report of the BCC land planning department reveals that the local authority has been receiving numerous unsolicited bids from various firms regarding the provision of pre-paid LP gas at residential homes, proposals that have since been approved by the city fathers. The report reads:

With this in mind therefore it was proposed that the BCC embrace the provision of piped gas reticulation which would comprise of a distribution depot, a mainline from the distribution centre, piping from the mainline to the households and prepaid meters for each consumer as opposed to the current situation where each individual household had its own gas tank at household level.

In this instance, it would entail that in new residential areas, as the stands were being serviced, the piping for gas provision also became part of servicing . . . This meant that households would no longer need to have individual gas tanks as the gas would be channelled through the distribution lines from the depot.

The individual consumers would have prepaid meters installed at their premises and would be able to access the amount of gas they would have purchased.

Statistics from the Zimbabwe Energy Regulatory Authority (ZERA) show that the country is recording a spike in the consumption of gas as an alternative energy source.

In the first quarter of 2021, Zimbabweans used 13 million kilogrammes of LP gas, up from 11 million kg consumed during the same period in 2020, the ZERA said.

A kg of LP gas retails for anything between US$1.90 to US$2.20 or anything above ZW$320 in local currency at garages in Bulawayo.