British Actress Thandiwe Newton Apologises For A Tweet On Zimbabwe 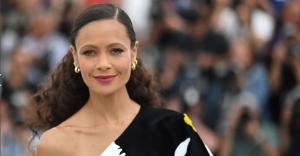 Melanie Thandiwe Newton Parker OBE an English actress has apologised for her tweet on Zimbabwe that seemed to have offended some quarters.

In the tweet that attracted the wrath of some Zimbabweans, Thandiwe was also apologising for claiming that the BFI London Film Festival had refused to accept “President,” an award-winning documentary she produced about the disputed 2018 Zimbabwean presidential election, on political grounds.

“President” considers allegations that Mnangagwa used violence against the opposition and manipulated the whole electoral process to hold onto power. The Zimbabwean linked actress said:

.@BFI I apologise for my comments @Variety challenging your integrity in not accepting #President #LFF2021. As a British Zimbabwean I’m devastated by the human rights abuses being suffered in our ex-colon. My upset was personal, and I was wrong to accuse. Thandiwe #LoveZimbabwe

The tweet did not go well with some Zimbabweans who did not hide their frustrations. Thandiwe then issued another apology:

My last tweet for a while. I apologise to any Zimbabweans who feel my actions are political. They are about HUMAN RIGHTS across the world, of which I have a 20-year career. Zimbabwe is my Mother’s birthplace, and to see her weep for her country, hurts my heart too. MERCY

But some did not accept the apology. Ranga Mataire, a Zimbabwean journalist and public relations professional responded to Thandiwe:

Very few Zimbabweans care a hoot about what you think. How you have suddenly found Zimbabwe a convenient punch bag is indeed puzzling. Could it be menopausal strain?

Others, however, fought in her corner saying those who had varying opinions wanted to silence her on human rights abuses in the Southern African country. One jewels @Jewels_MsJay, however, believes the anger of some Zimbabweans is justified. Said jewels:

I don’t think anyone wants to silence her really. What does she mean by our EX Colony? How are black ZIMBABWEANS meant to feel by that statement?

Howard @HMutseyekwa suggested that Thandiwe had no right to comment on Zimbabwean issues since she had little information about the country. Said Muteyekwa:

Have you ever lived here? Experienced life? Or you get an exaggerated narration? You want to be a champion of human rights? Stand up for Afghanistan, Syrian, Libya, DRC, Yemen, Palestine, Mali and Thailand. We can’t be used for woke culture. I refuse. Stick to movies.

Mutseyekwa’s view was dismissed by an exiled former cabinet minister, Patrick Zhuwao, who said Thandiwe had every right to comment. Zhuwao, whose uncle, the late former president Robert Mugabe is popularly known for declaring “Zimbabwe will never be a colony again,” said:

Mukoma Howard @HMutseyekwa s out of order to muzzle @ThandiweNewton I haven’t lived in Nigeria, Russia, America, China, Bolivia nor other country, but I have views on them just like you do Sis @ThandiweNewton should comment on Zim including what I did wrong as ex-minister.

One Mhofu @mhofela_mhofu who used to use a Twitter handle under the name Matigary asked Thandiwe:

Zimbabwe is your mother’s birthplace, and also your EX COLONY.

You are just a misguided belated political malcontent with a white supremacy complex. You don’t care about human rights. You are a spent force. When you were a paid actor did you protest the violation of human rights in Iraq under false pretences by Tony Blair? What human rights?

Her language was inappropriate. I don’t like Zanupf at all but her tone lacked the aura of a human rights fighter. How can one demean the very same pple one claims to be fighting for? Questions about sincerity become necessary in that instance.

The Terraces 3 months ago

Revise your language #Newton
Who is you ex colon? We are a new generation and were never colonised by anyone.

Actress do not fear,indeed ZIMBABWE have gone to the 🐕🐕