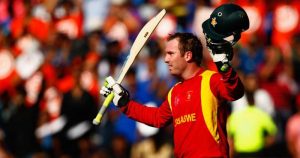 The International Cricket Council (ICC) has banned former Zimbabwe captain Brendan Taylor from all cricket for three and a half years.

The ICC announced on Friday that Taylor had accepted breaching four charges of the ICC Anti-Corruption Code and, separately, one charge of the ICC AntiDoping Code.

The ICC said the 35-year-old admitted to being in breach of the following provisions of the ICC Anti-Corruption Code:

1. Article 2.4.2 – Failing to disclose (without unnecessary delay) the receipt of any gift, payment, hospitality or other benefit that (a) the participant knew or should have known was given to them to procure a breach of the Code or (b) that was made or given in circumstances that could bring the participant or the sport of cricket into disrepute.

2. Article 2.4.3 – Failing to disclose to the ACU (without unnecessary delay) receipt of gifts/hospitality with a value of US$750 or more regardless of the circumstances in which they were given.

3. Article 2.4.4 – Failing to disclose to the ACU (without unnecessary delay) full details of the approach received to engage in corrupt conduct under the Code including in relation to Zimbabwe’s then-upcoming series against Sri Lanka and/or Bangladesh.

4. Article 2.4.7 – obstructing or delaying an ACU investigation, including concealing, tampering with or destroying any documentation or other information that may be relevant to that investigation and/or that may be evidence of or may lead to the discovery of evidence of corrupt conduct under the ICC AntiCorruption Code.

The ICC said Taylor chose to admit the charges under the provisions of the ICC Anti-Corruption Code and agreed to a sanction with the ICC in lieu of an Anti-Corruption Tribunal hearing.

It added that Taylor will be free to resume his involvement in the game on 28 July 2025.

Taylor, who played for Zimbabwe in 34 tests, 205 one-dayers and 45 T20s, retired from international cricket in September.

Earlier this week, Taylor confessed to taking US$15 000 from an Indian businessman as a “deposit” for spot-fixing.

In a statement, Taylor said he was promised that an additional USD$20 000 would be paid once the “job” was complete.

The Terraces 5 months ago

Thats what happens when you don't pay people. They end up taking bribes. SHAME

BRENDON TAYLOR HAS DISAPPOINTED MANY PEOPLE INCLUDING THIS BUSH LAWYER.

HE STARTED PLAYING CRICKET WHEN HE WAS BELOW OR AT ABOUT 20 YEARS, ALMOST AT THE SAME TIME WITH MADZORERA. HE ALSO CAPTAINED THE NATIONAL CRICKET TEAM.

HE WAS A FINE CRICKETER. HE HAS RUINED HIS REPUTATION IN CRICKET CIRCLES. NOONE NOW WANTS TO ASSOCIATE WITH HIM IN ALL CRICKET STRUCTURES.

LET US HOPE THAT HE HAS COMPLETELY ABANDONED DRUGS AND THAT HIS LIFE IS NOW NORMAL.

IN HIS DEFENCE, TAYLOR ALSO SAID HE DID NOT DO IT OUT GREED, BUT OUT OF LOVE TO FEED HIS FAMILY AFTER SPENDING SIX MONTHS WITHOUT BEING PAID BY CRICKET ZIMBABWE.

THIS MUST SERVE AS A STRONG WARNING TO OTHER PRESENT AND UPCOMING CRICKETERS.

Haa ma1 guys, yazopera hayo i've beenfollowing this story since the on-set of the investigations but what happened to the other PARTY? Iye mudhizi wacho