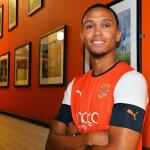 Plymouth Argyle defender Brendan Galloway has the chance over the next week to secure a place in the Warriors squad for the delayed 2021 Africa Cup of Nations (AFCON) finals.

Galloway made his debut for Zimbabwe in a 1-0 home defeat by Ghana last month after previously playing for England at age-group levels.

The Warriors are away to South Africa at the FNB Stadium in Johannesburg on Thursday and will then host Ethiopia at the National Sports Stadium on Sunday.

The Warriors will begin their 2021 Africa Cup of Nations campaign against Senegal in Bafoussam on January 10.

They will then play Malawi, at the same venue, four days later before taking on Guinea on Yaounde on January 18.

Speaking to The Plymouth Herald, the defender said it would be an honour to represent Zimbabwe at a huge tournament. He said:

Hopefully, I will be involved. It would be an honour to go and represent them and to get that experience at a major international competition.

If I can continue to play well here (at Argyle) and work hard, then hopefully I will see the rewards of that.

Galloway agreed to a short-term contract with Argyle until January when he signed as a free agent before the start of the season and has gone on to put in a series of consistent performances.

His international debut against Ghana meant he returned to Zimbabwe for the first time since he was six years old and his family moved to the UK.

Speaking on his Warriors debut, Galloway said it was a proud moment for him and his family. He said:

It was a lot different over there with the weather conditions and having to adapt to playing with different players who I have not played with before, but I really enjoyed it.

The atmosphere in the Zimbabwean camp is really good, we are all in high spirits.

Galloway was an unused substitute for Zimbabwe’s 3-1 defeat away to Ghana on October 9 after his trip to West Africa was delayed.

Yeah it is great to represent your country