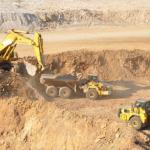 A Botswana company has accused its Zimbabwean partners of fraud and elbowing them out from a Masvingo joint gold mining venture.

The local partners have allegedly politicised the issue and accused the investors of sponsoring MDC Alliance leader Nelson Chamisa.

Kassim was meant to transfer his gold claims known as Golden Hill mine registration numbers 8469, 8470, 8471, 8472 and 8473 into Bradfix Incorporated (Pvt) Ltd. In return, Bradfix Investments Pvt (Ltd) was to invest through connecting electricity and other amenities.

The Botswana investors are seeking ZIDA assistance in the renewal of the investment licence to protect their investments.

Bradfix says Kassim has fired all representatives of the Khan brothers from the mine to elbow out the Botswana investment firm from the mine.

He adds that ZIDA is mandated with attracting, retaining and assisting investors who would have been attracted successfully into the country cautioning that the case might result in the flight of some investors thereby eroding gains made in making the country.

This is happening as the government is pushing the “Zimbabwe is open for business” mantra.

You want all other investors n would be investors to be leave Zimbabwe, you won't win here.