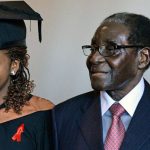 Bona Chikore, the daughter of the late former president, Robert Mugabe, has disowned several social media accounts that are using her name.

Reads a statement by her lawyers, Venturas & Samukange Legal Practitioners:

Our client advises that her name has of late been unlawfully, without her knowledge and consent been ascribed to several accounts on several social media platforms, in particular, Facebook and Instagram…Our client is not a media personality. She is and has been a very private person and would like keep it that way.

Please be advised that our client shall not bear any legal responsibility in connection with the continued active status of these several social media accounts whose operations are at the instance of someone whose ulterior motives are unknown at this stage.

The attorneys added that they are working with the “responsible authorities” to bring to book the people behind the fake social media accounts.