Blow For Ex-Minister Mupfumira As Witness Nails Her To Corruption 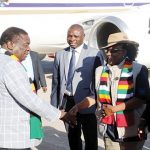 A State witness on Tuesday claimed that former Tourism minister Prisca Mupfumira had indeed acted in a corrupt manner during her tenure as the Minister of Public Service, Labour and Social Welfare.

The witness, Mrs Memory Mukondomi, who is the former director of finance and administration in the Ministry of Public Service, Labour and Social Welfare, said Mupfumira put officers under immense pressure to hasten the signing of a housing agreement at the centre of the case.

She told the court that Mupfumira would call them to quicken the signing of the agreement between the National Social Security Authority (NSSA) and Drawcard Investments, a company that was to undertake the housing project in Gweru.

Mupfumira wanted the agreement to be completed within 48 hours, she said.

Mrs Mukondomi told the court that Mupfumira at one point, during a meeting, demanded to have the process speeded up so that the project would be launched on the same date with the National Building Society (NBS). She said:

On June 19, 2017, we were called to attend a meeting where Mupfumira and some board members were in attendance.

It was about investment in a housing project.

Another meeting was held at Anesu Building where NSSA board members met, I included. At that meeting, there was now urgency coming from the Minister saying there was a need to complete the agreement.

On July 27, I received an e-mail from (NSSA) board chairman Mr (Robin) Vela saying they could assist since there was a misunderstanding on the housing units to be constructed. In the e-mail, the chairman emphasised the need to expedite the whole process.

Mrs Mukondomi told the court that Mupfumira was not supposed to be involved in the build-up to the agreement between NSSA and Drawcard Investments adding that she was supposed to get reports from committees responsible for the project operations.

Mupfumira claimed Mrs Mukondomi was hired to assist and strengthen the State’s case against her through her testimony.

Mupfumira is jointly charged with Barnabas Matongera for allegedly speeding up a project to build low-income houses in Gweru through Drawcard Enterprises without seeking the approval of the NSSA board and without going to tender.

The matter continues this Wednesday.

Hapana zviripo.. it's a show off nje that they making loads of 💰... showing off what Priscilla has... nothing more

The whole process is choreographed. Mupfumira will be acquitted. These charges were brought in to make the gullible believe Mnangagwa's ZACC work so they sacrificed Mupfumira giving her assurance that she'll not see the inside of prison. She's been treated with kid gloves from day 1. The same happened with Obadiah Moyo; he was made the scapegoat for the Drax scam and got given assurance he'll be unscathed and we all saw him getting acquitted. The Prosecution is captured so they are made to prosecute through weak lines and the Judiciary is also captured they are made to clear the accused of all charges.