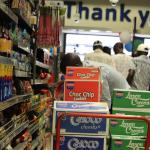 The majority of Zimbabweans face a bleak Christmas this year due to chronic economic challenges made worse by the COVID-19 pandemic.

Normally, thousands of Zimbabweans travel for holidays or to their rural homes to spend Christmas with their extended families but 2021 is increasingly becoming an exception.

Richard Phiri, a school teacher in Mhondoro, 95 kilometres southwest of the capital Harare, told Anadolu Agency that this year’s Christmas will be just like any other day. Said Phiri:

As a teacher, I am always in arrears, I got my bonus in US dollars in November but that money was directed toward pending school fees.

If the economy was right, I would have slaughtered a goat for a family feast and bought my children new clothes and gifts, unfortunately, I can’t and I will spend time in the fields.

I sometimes get help from my sisters staying in South Africa, when they visit at the end of each year during the festive season, we get to share the responsibilities, this year they won’t be travelling as they will be forced to quarantine for 14 days.

However, Richard, a 45-year-old father of three, received some money from his sisters but has to share it with his aged parents who live in the nearby Marenga village. He said:

I received $100 to cushion myself for Christmas from my siblings living in South Africa, but again the exchange rate rendered that money useless.

I had to share some of my groceries with my parents who live in a village close by.

An economist, Luckson Zembe, believes the move by the Government to pay bonuses to civil servants in US dollars has triggered price hikes. Said Zembe:

This was commendable on the part of the government, but most government workers decided to pay school fees for next year, rentals and food, leaving nothing for Christmas.

Business has not been doing good throughout the year owing to various challenges, including COVID-19.

The assumption by retailers is that everyone received a bonus, hence they have increased prices to make up for the losses during the year.

Zembe said that a delay in rains has worsened the average person’s problems. He said:

The rain season has not been really good, so far the first part of the season that ends December has produced little rain.

A number of people are beginning to start working on the fields now, yet normally by this time, families would be helping themselves to green mealies, and cushion themselves on Christmas.

Olivia Mpeta, a 36-year-old mother of two said she cannot afford to buy new things for her children this Christmas as she has to save for school fees next term. She said:

Children love toys, new clothes, shoes and maybe going out on Christmas. I am unable to do that this year because I have to save money for school fees next year.

A street vendor in Harare, James Munemo said shoppers are prioritising books and food over clothes. He said:

I am a second-hand clothes vendor in Harare, I could see people flocking in with their children to buy the cheap clothes we sell, yes sales were better than other normal days not comparable to other Christmas periods. This year people seem to be focusing on books and food.

Command economics dzauraya nyika. The country is being ran like a video game

My understanding is that a person qualifies to be called an Economist only if they hold, at least, an undergraduate degree in Economics from a reputable and accredited University or college. An internet search of credentials of the gentleman referred to as an Economist in the article above appears not reveal any such degree as being held by said gentleman. It is not really fair to genuine Economists like myself to call anyone, who is privileged with media opportunities to comment on economic matters an Economist, when they don't hold a degree(s) in Economics. Not so long ago, one national broadcaster used to do the same, with one particular holder of a diploma in Agriculture being referred to as an Economist. Why not just call them social commentators, if the intention is to give them a fancy title or just call them a Zimbabwean!One does not become a medical doctor, without being trained as such, by simply commenting on medical issues. Likewise, one doesn't become an Economist by commenting on economic matters without the requisite training to become an Economist.