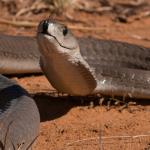 Two brothers from Buhera died after being bitten by a black mamba (rovambira) last Saturday while hunting in Gukuranenzara Mountain in Buhera District, Manicaland Province.

Tawananyasha (9) and Tinotenda Newman Mujeyi (14) of Gandidze Village under Chief Makumbe, died on their way to Murambinda Mission Hospital moments after being bitten by the venomous reptile.

The two siblings were in the company of several friends who were not attacked by the snake.

They (Mujeyi brothers) went for a hunting expedition in the company of their friends last Saturday.

On their way home, they fell down and their colleague reported the matter to the duo’s father, Mr Blessing Mujeyi. The two died on their way to Murambinda Mission Hospital.

So sad from one family

US$4.00 Harare
Kudzai Machaka 6 months ago

I have sympathy to the Mujeyi family for the death is the law of God. The duo may rest in eternal lyf.

My their souls rest in peace

Shame may their soul rest in peace

Probably they tried to rescue one another as brothers

May their souls rest in Peace

My their souls rest in peace

What a sad sad story