Biti Okay, But Feels "As If He Is In Beirut" - Coltart 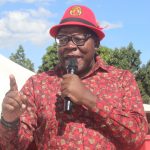 There was heightened anxiety in opposition circles on Tuesday morning after social media reports claimed that Biti was abducted from his Harare home on Monday night by armed suspected State agents.

Coltart on Tuesday midday said he had spoken to Biti who assured him that he was fine but believes his offices and home have been under surveillance by suspected state operatives over the past few days.

Biti said he feels as if he is in Beirut, in reference to the capital city of Lebanon, a small Arab country situated along the Mediterranean coastline, that has experienced instability in recent months including unexplained explosions and street gunfights involving militias. Said Coltart:

I have just spoken to @BitiTendai and he is okay. However, he says that suspected state operatives have been conducting surveillance at his home and law offices during the last few days and he feels “as if he is Beirut”. Please join me in praying for his safety.

I spoke very briefly with VP @BitiTendai. He seemed frazzled & said “pane zvirikuitika.” He said he had to attend to something urgently but would revert to me as soon as he is able. This is the verified position. Please await further updates from our official channels.

Please be advised that SG @hwendec has not spoken to any journalists and the fake news article quoting him as having spoken about the whereabouts of VP @BitiTendai is untrue. Please disregard any information that doesn’t emanate from our official channels.

Only for madofo 2 believe yo shit. We are fade up ne circus dzenyu. Nonsense

You can say that again, this new method of politicking from Chamisa and company should be least on the tolerance list!

Biti must be clear on this case, coz we might lose faith and hope in him

US$8.00 Chitungwiza
ITAI ZVAMANGAMUCHINGOITA 6 months ago

Does the MDC know that these type of errands make them a circus lot..🤥..#MukomanaHaasatieAnePlan

Don't these guys have security details or even surveillances @ their residents we begin to wonder if these allegations are true or u just blubbering . Tanzwa nema lies enyu rega @mazanu say its stage managed coz hapana evidence to support wat u are sayin #NgapindeHakeMujaya

THIS IS THE BEHAVIOR THE MDC ALLIANCE HAS OBSERVED ON BIT.

NOW WHERE IS HE?
WHAT IS HE DOING THERE?.

HE MIGHT BE FISHING NELSON?
HE WILL CATCH HIM.

WHO REPORTED THE ABDUCTION.