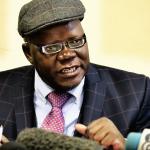 Last week, Moyo suspended Mafume pending the finalisation of his corruption charges before the courts.

However, this has not gone down well with Biti who has accused Moyo of being the most corrupt and destructive Minister.

Below is Biti’s full statement:

If Kirsty Coventry is the worst Minister in this regime July Moyo ranks as most corrupt, most destructive, most deceptive.

For four years he has failed to enact a law actualizing the Devolution provisions in the constitution despite numerous High Court Orders.

He has overseen the collapse of local authorities through acceptance of (Douglas) Mwonzora s wanton recalls.

His treatment of mayors is disdainful and unconstitutional.

Mayors are not employees.

But it is July Moyo’s corrupt relationship with land barons that has been most destructive.

He has relationships with crooks such Kenneth Roydon Sharpe and many others prejudicing millions of home seekers and causing environmental degradation through wetland and other illegal developments.

July Moyo has made Ignatius Chombo, the arch land looter look like a saint.

His indulgence in the world of the occult is also a cause for concern.

In Sept 2019 he gathered certain chiefs for some rituals in the Midlands under guise of revival of Rozvi-Moyo dynasty.

Shuffling mayor is a sign or an ambush which they want to do in the absence of mayor mafume he wants to exercise and stretch and feel how his powers are running In him. Something illegitimate they want to do concerning the issue of land

I DID NOT KNOW THAT KIRSTY COVENTRY WAS THE WORST PERFORMING MINISTER IN THIS REGIME. THANK YOU MR BITI FOR EDUCATING ME. LET ME LEAVE SLEEPING DOGS LIE KKKK.

IT IS UNFAIR TO KEEP LAWYER JACOB MAFUME ON AND OFF FROM HIS MAYORSHIP ROLE. DO NOT TORMENT HIM THROUGH INJUSTICE WHICH YOU CLAIM TO BE JUSTICE.

THIS PIECE OF ADVICE TO CDE MINISTER OF LOCAL GOVERNMENT IS FOR NOTHING. IT IS NOT PAID FOR. IT IS FOR FREE.

THERE IS REAL PERSUASION FOR MINISTER MOYO TO ACT LIKE LAWYER TENDAI BITI IS SAYING. DEVOLUTION FUNDS ARE FOR SURE AT HIS MERCY.

VA MOYO [NDIZVO], GOVERNMENT FUNDS MUST BE DIRECTED TOWARDS
GOVERNMENT JOBS AND NOT POLITICAL PARTY JOBS.

[I AM GIVING THIS ADVICE FOR FREE. IT IS NOT PAID FOR].